World governments spent roughly $249 per person on military expenditure, equivalent to 2.2% of global GDP. The majority of this – 62% – stemmed from the world’s top five spenders; the US, China, India, Russia and Saudi Arabia.

SIPRI researcher Dr Nan Tian said: “Global military expenditure was 7.2 % higher in 2019 than it was in 2010, showing a trend that military spending growth has accelerated in recent years. This is the highest level of spending since the 2008 global financial crisis and probably represents a peak in expenditure.” 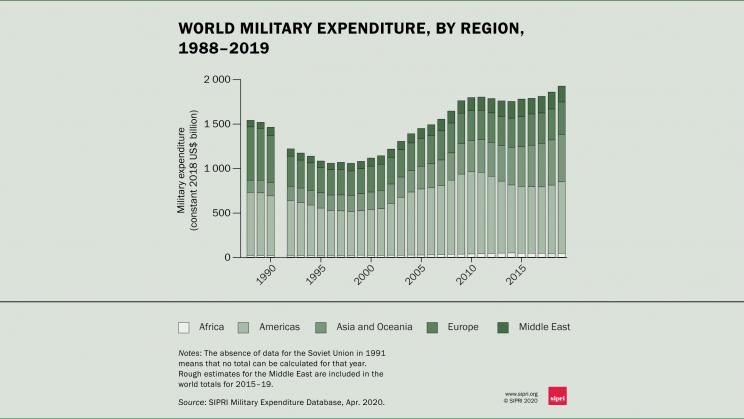 In 2019, the US increased its defence expenditure by 5.3% to a total of $732bn. This figure accounted for 38% of the entire worlds military spending. The US defence spending increase alone was the same as the military spend of Germany for the same period.

SIPRI senior researcher Pieter D. Wezeman said: “The recent growth in US military spending is largely based on a perceived return to competition between the great powers.”

China in the same period spent $261, a 5.1% increase on the previous year, building on 25 years of continuous growth in defence spending since 1994.

In its full report, SIPRI said: “The growth in its military spending has closely matched the

country’s economic growth. Between 2010 and 2019, China’s military burden remained almost unchanged, at 1.9% of its GDP.”

India for its part, has continued to expand its military spending, largely owing to tensions with neighbouring Pakistan and China, which SIPRI Senior Researcher Siemon T. Wezeman called “major drivers for its increased military spending”

In 2019, India’s defence spending rose to $71.1bn, which saw the country pull into third place as Saudi Arabia drastically cut its spending.

In the same period, Russia also expanded its military spending by 4.5%, also climbing up the rankings as a result of Saudi Arabia’s decreasing spending.

SIPRI researcher Alexandra Kuimova added: “At 3.9% of its GDP, Russia’s military spending burden was among the highest in Europe in 2019.”

Saudi Arabia, in 2019, fell from the world’s third-biggest defence spender to the fifth, after a cut of 16% to military spending when compared to the year prior.

SIPRI’s report added: “Saudi Arabia’s decrease and the increase in Russia’s spending (4.5%) meant that Russia moved up one place in the rankings, from fifth to fourth, while Saudi Arabia fell from third to fifth.”

The rest of the pack

SIPRI researcher Diego Lopes da Silva said: “The growth in German military spending can partly be explained by the perception of an increased threat from Russia, shared by many North Atlantic Treaty Organization (NATO) member states.

“At the same time, however, military spending by France and the United Kingdom remained relatively stable.”

Increasing by 10% in 2019, Germany’s military spending increased to $49.3bn, the biggest increase by percentage within the world’s top 15 defence spenders.

Excluding North Macedonia, which joined NATO this year, in 2019 NATO members spent $1,035bn. Overall defence spending across NATO continued to increase as more and more members strove to meet the recommended spend of 2% of GDP on defence budgets.

NATO expenditure also increased as a result of ongoing modernisations efforts, Bulgaria increased its defence expenditure by 127% largely due to aircraft purchases and Romania by 17%.

5. The Middle East, (No SIPRI estimate)