Instead of turning to futurists and sci-fi remakes, Global Defence Technology chose to examine some of the key themes of 2020 to predict what areas of defence would receive the most attention and development in the year ahead. We don’t like to boast, but we think we did quite well.

We said that one of the most promising optionally-crewed technologies was the UK Tempest sixth-generation fighter aircraft concept. The future jet is set to incorporate the most modern open-architecture technologies to stay ahead of future threats.

An apparent drawback of such a system is the need for extremely complex software that can not only control the aircraft and its weapons but can also collect a huge amount of data while translating that into useful information. By awarding a new £250m contract to Team Tempest in July, the MOD showed a willingness to battle such a challenge.

Although BMT’s project to create a highly-autonomous warship is not an optionally-crewed concept per se, it is worth mentioning here. The company’s vision for 2040 and beyond is to create lean-crewed vessels with integrated AI and intelligent systems. Instead of having the option to deploy crew on the ships, the concept seeks to reduce the number of people who need to be in a high-threat environment.

But BMT thinks removing crew from vessels entirely may not be an option just yet. Research and development lead at BMT Jake Rigby said earlier this year: “We want to keep humans doing what they’re really good at and let computers do what they are better at doing and focus on how we can pair these elements.”

We said that integrated forces between allies and different domains are set to become increasingly important. In 2021, It was difficult to talk about UK or US military developments without considering multidomain integration, the US Joint All-Domain Command and Control concept or collaboration between the two countries.

The UK Government published its Integrated Review in March, emphasising the importance of extending the countries’ relationships with allies and partners around the world. 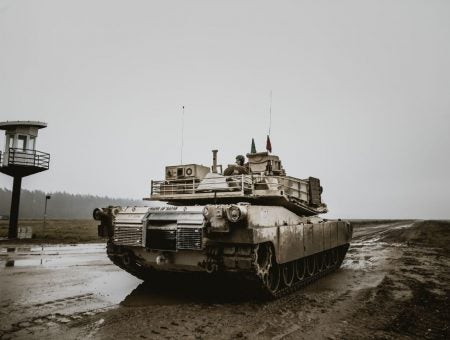 Projected to roll out in fiscal year 2022, the Regionally Aligned Readiness and Modernization Model (ReARMM) will aim to transform the army into a multi-domain capable force. Credit: Sgt Arturo Guzman.

Prime Minister Boris Johnson’s 2030 vision for a more competent, more capable, influential and resilient United Kingdom is clear. It reads: “The United Kingdom will be a beacon of democratic sovereignty and one of the most influential countries in the world, tackling the issues that matter most to our citizens through our actions at home and overseas.”

In July, a meeting between UK Defence Secretary Ben Wallace and his US counterpart Lloyd Austin saw the extension of an agreement that improves US and UK aircraft carrier joint operations. Wallace said: “The US continues to be the UK’s most important defence partner and we are working together, across all domains to confront future threats.”

But alliances were formed and strengthened elsewhere. In a statement released in March, the White House also highlighted its commitment to the quadrilateral cooperation between Australia, India, Japan, and the United States. It said: “Together, we commit to promoting a free, open rules-based order, rooted in international law to advance security and prosperity and counter threats to both in the Indo-Pacific and beyond.”

A new pact between Australia, the UK and the US announced in September, called AUKUS, has also steered up tension in the Indo-Pacific region as well as in Europe. Under the agreement, the US and the UK will help Australia to acquire nuclear-powered submarines instead of the French diesel-powered ones.

Also in September, multidomain integration was the main theme of DSEI 2021, with Head of UK Strategic Command General Sir Patrick Sanders calling for new skills and training to meet demand.

Proliferation of the military IoT

Technologies like automation, AI, virtual reality (VR), synthetic environments and quantum computing can revolutionise defence. But for these technologies to work, establishing a singular, future-proof and secure communications network is vital.

VR and synthetic solutions have also claimed their fair shares of the defence pie, especially toward the end of 2021. Inzpire began offering its Whole Training Solution to helicopter crews in the UK and EU. The programme involves synthetic environment training that seeks to teach personnel how to fight as a crew.

In November Elbit system was awarded a contract to deliver the British Army’s Interim Combined Arms Virtual Simulation (Deployable). This is a pathfinder project for the Collective Training Transformation Programme and will replace the current Unit-Based Virtual Trainer system by 1 April 2022. The US Air Force at Sheppard Air Force Base has also been experimenting with the delivery of the Crew Chief Fundamentals Course as a VR experience.

While there have been no incidents of one country aggressively attacking another in this way, the ground is already being laid by cyber-attacks which could easily translate into the space domain. Credit: Courtesy of Christiaan Colen

Last year we argued that most people access space-delivered resources via their screens than from inside rockets, a handful of billionaires aside. We were not wrong. As around £1bn UK economic activity is supported by space assets each day, protecting such assets against cyber threats is essential.

Talking to Global Defence Technology in March after his appointment, DSEI’s space advisor Dr Michael Holden told us: “Space-based assets are critical to the modern military’s capability and form part of the critical national infrastructure of a modern economy.

“To put these cyber threats in context, the US defence space strategy listed the threats that they see to space-based systems on a continuum from denial and deception, electronic warfare, directed energy weapons, cyberspace threats, orbital threats, kinetic energy threats, ground site attacks and nuclear detonation in space.

“This also needs to look at the personnel, the doctrine, the processes, the policy, the legislation, and the physical security as well as the technical considerations,” he said. “The design of the protection needs to consider all these issues and pull together a coherent design and plan in terms of that risk-based approach.”

We predicted that US President Joe Biden’s tenure would be largely overshadowed by his commitment to the nuclear arms reduction treaty between the US and Russia. On 3 February 2021, the countries agreed to extend New START by five years, as allowed by the treaty’s text. The new treaty includes limits on nuclear warheads, bombers, missiles, ballistic missiles and launchers.

Russian President Vladimir Putin could still test the Biden administration and other nations by instigating a land conflict. The Pentagon is viewing ways to deter a potential Russian invasion after unusual movements and build-up of its troops at the Ukrainian Border.

NATO Secretary-General Jens Stoltenberg said that that the military movements are “unprovoked and unexplained” and that although Ukraine is not a NATO member, it is a valued partner of the alliance.

These tensions are likely to bleed into the new year, especially as China is also likely to scrutinise the White House’s response. Beijing’s relationship with Taiwan is not all too different from the Russian-Ukrainian one.