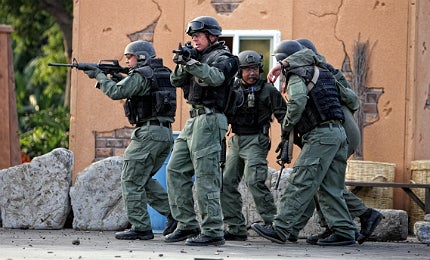 As the face of 21st century conflict continues to shift and the battlefield becomes ever more asynchronous and complex, the challenges confronting military, law enforcement and intelligence personnel are more formidable than ever. With the intricacies of major security topics such as counter-insurgency, counter-terrorism and disaster response evolving at a rapid pace, military and security training techniques and technologies have undergone a similar evolution.

Advances in simulation have opened up new possibilities in many fields of instruction, but at the other end of the training spectrum there is reality-based training (RBT), which seeks to immerse trainees in convincing physical recreations of security or combat scenarios to encourage lightning-fast tactical decision-making.

"This is reducing the onset of post-traumatic stress and anxiety disorders that are related to being in an area of conflict."

Hollywood-style explosions and gunfire provide realistic approximations of their real-life counterparts, and some gruesome prosthetics work helps to inure soldiers to the horrors of the battlefield. RBT’s proponents argue that this method, used in conjunction with more traditional tuition, allows trainees to hone their skills in a realistic environment and even reduces incidences of post-traumatic stress and anxiety disorders.

The Halo Corporation and its training partner Strategic Operations (STOPS) are two such proponents. Halo and STOPS, both based in San Diego, California, work on what they call "hyper-realistic" training programmes for armed forces, special forces, law enforcement and intelligence organisations in the US and around the world – STOPS alone has provided training support to more than 600,000 operators.

The companies recently participated in Halo’s Counter-Terrorism Summit, a massive event involving major demonstrations of RBT sessions, including a tongue-in-cheek "zombie apocalypse" scenario that grabbed widespread attention from mass media. We talked to Halo’s president Brad Barker and STOPS executive vice president Kit Lavell to discuss the advantages of immersive training and its place within the broader training landscape.

Chris Lo: What is your experience of delivering realistic training programmes?

Brad Barker: We have a wide range of clients from all over the world, including local, state and federal law enforcement, military and the intelligence community.

We were the first company to use military training actors – now called role players – with detailed knowledge of the language, customs and culture of the Middle East, East Asia, south-east Asia, West Africa, Latin America and the Philippines.

We introduced Hollywood medical special effects to the military training world with makeup artists simulating combat wounds so realistically that many training participants thought the wounds were real and possibly caused by negligent discharges. Trainers frequently called "time out" in order to assess the situation. We’ve employed dozens of amputee actors in scenarios in which makeup artists fashioned realistic limbs which were then traumatically severed with STOPS battlefield effects.

CL: Is there evidence that immersive training leaves military personnel more ready to face the challenges of actual operations?

BB: We’re creating an environment with actors and technology that allows the student to be completely immersed into a world that is not unlike where he or she is going to be deployed. The results are staggering, not only in their effectiveness but physiologically there’s a reduction in adrenaline, cortisol and other measurable biological and chemicals reactions that the body will exhibit when under tremendous stress.

With the help of Hollywood-style special effects you can really sell the scenario to the attendee or student. So this is reducing the onset of post-traumatic stress and anxiety disorders that are related to being in an area of conflict and dealing with that trauma head-on. We call that stress inoculation.

The researchers measured salivary cortisol and alpha amylase levels in Marines before and after immersion in this hyper-realistic environment. Preliminary results in this ongoing study found that the acute stress response to the IIT training was substantial. Salivary hormone levels also indicated that this type of training provided a stress inoculation effect.

CL: How do you think simulation matches up to RBT training in terms of effectiveness?

BB: With regard to technology training, there’s nothing better. If you are training a pilot on how to fly a UAV and his interface is digital, all you have to do is simulate that scenario – it’s just not connected to a real unmanned system. You have 100% efficacy there, if you do it enough.

But getting the guys in an immersive scenario, where the outcomes are hardly certain and they’re not clued in on what the opposition is going to do – this is where I see the world going.

It’s dramatically less expensive than spending a tonne of money on R2-D2 and C-3PO to train folks, but there are huge benefits to having the mature operator train the junior operator on historic methods of operation and then dusting that off and applying it to real-world counter-insurgencies or disaster response scenarios, based on emerging threats.

CL: With the high production values and slightly tongue-in-cheek sessions like the Counter-Terrorism Summit’s zombie apocalypse scenario, is there a danger that participants might find the training too ‘fun’ and miss out on the lessons to be learned?

KL: The demonstration scenarios that STOPS provided at the Halo Summit were not to train participants, but rather to showcase how training could be conducted hyper-realistically.

"We know that those who plan to do us harm are using reality-based training – they are mining the internet for scenarios."

The ‘zombie apocalypse’ scenario had a very serious purpose, to demonstrate the complexity of responding to a chemical / biological incident or event. Rather than using a specific political or geographic ‘bad guy,’ and because it was Halloween, ‘zombies’ provided a simple and benign adversary for the event.

The only real biological attack our nation has faced was the anthrax attack shortly after 9/11. Lessons learned after that tragedy showed just how vulnerable we are. A single person with a contagion could shut down an entire hospital without proper decontamination.

Training that integrates decontamination with medical response teams is vital – proper decontamination equipment and learning how to use it is a priority for first responders. These were elements of the scenario we demonstrated.

CL: With technology becoming so much more accessible, do you think realistic training is one thing that can’t be replicated in by terrorists or other attackers?

BB: I think that unfortunately, we’re a little behind the game right now. We’ve got quite a bit of catching up to do, because we know that those who plan to do us harm are using reality-based training.

They are mining the internet for scenarios. They’re using the benefit of their research to develop scenarios based on what they see in the media.

So we have an obligation to do intelligence research and analysis on this exportation of terrorist methods, and then find out what the common threads are. If we can just get 80% of those methods and develop hyper-realistic, immersive training methodologies to prepare for them, then we’ve got something significant.

CL: How important is it that training acknowledges past events, for example Hurricane Katrina or the Mumbai attacks, to update best practices and avoid past mistakes?

BB: The big deal with Katrina was communications interoperability. Nobody knew what the heck was going on. No one knew what someone had or what someone needed during most of that event.

"Makeup artists have simulated combat wounds so realistically that many training participants thought the wounds were real."

There was a whole lot of people starving over here, then two blocks over there was a whole bunch of food going bad and no one knew it was there. There was no communication, co-ordination or collaboration at any level, and in the gaps between those three Cs, people died.

Mumbai is another watershed moment, because that was the first time in history, in my view, where our opposition, the bad guys, were able to use technology as a force multiplier. They were able to co-ordinate that attack using technology that just ten years ago was only available to the most elite intelligence communities. In a decade, that stuff is available to a kid, oh and by the way it’s all in his pocket on his mobile device.

CL: How could training become even more immersive in the next five or ten years? 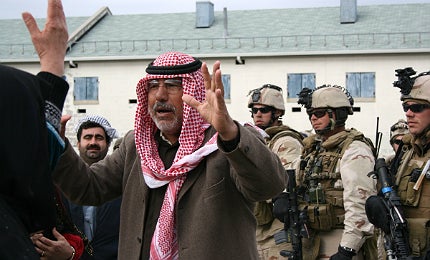 KL: The near future will bring greater realism in live training environments – the sights, the sounds, the smells, will increase in fidelity. Tracking of participants, results of engagements and after action review will become simpler, more streamlined and effective. Visual weapons effects both on participants and in the environment will become more realistic.

BB: If you look at a major flashpoint as the ‘bang’, we should start to focus on ‘left-of-bang’ and try to eliminate the threat while it’s in its planning stages. Because we know the bad guys are going to break the law before the bang – we know they are. If you can teach intelligence, special operations and law enforcement the methods of operation and what these perpetrators need to do to carry out their acts, if you teach them what to look for, they will go and find it. We know that. So let’s resource them there.