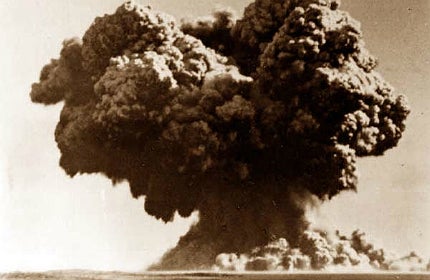 With a history of independent atomic research pre-dating the Allies’ collaborative Manhattan project of World War II, the United Kingdom was the third country to test an indigenously-developed atomic weapon, and today still remains firmly committed to maintaining its own nuclear deterrent.

"The UK played a notable role in bringing about the 1963 Nuclear Test Ban Treaty and the Nuclear Non-Proliferation Treaty."

At the same time, Britain has always advocated mitigating the global threat that such devices pose, signing up to all of the major international non-proliferation treaties and export controls on all forms of weapons of mass destruction, while also progressively reducing its own nuclear stockpile.

Nevertheless, although the UK played a notable role in bringing about the 1963 Nuclear Test Ban Treaty and the Nuclear Non-Proliferation Treaty in 1968, subsequent British influence on arms limitation and disarmament was to prove distinctly small throughout much of the Cold War period.

However, since then, British scientists have been quietly working on a variety of projects to help make former Soviet states nuclear-free and – though their story has been largely eclipsed by better known initiatives, such as Washington’s Nunn-Lugar – through the UK’s own Global Threat Reduction Programme, the UK is still very much involved.

Indeed, the Stockholm International Peace Research Institute (SIPRI) background paper, ‘The delivery of EU non-proliferation and disarmament assistance in Russia’, describes the UK as "one country that made a dramatic increase in the level of its anticipated support" since the adoption of the G8 Global Partnership in 2002.

For its part in this formal multilateral non-proliferation initiative, London committed up to $750m over ten years, to help fund and implement measures to keep nuclear and other weapons of mass destruction out of the hands of terrorists and rogue states.

In practical terms, this has resulted in a wide range of projects, including ones to dismantle submarines, safely dispose of 34 tonnes of plutonium, destroy a 40,000-tonne chemical stockpile and even create new employment opportunities for former Soviet weapons scientists.

"In general, I believe the most significant work undertaken by the UK in Russia has been their assistance in the safe and secure decommissioning of old Russian nuclear submarines," says Hugh Chalmers, nuclear analyst at the Royal United Services Institute for defence and security studies (RUSI).

"When the UK was contributing to relatively high-profile projects, tax-payers may have found it hard to appreciate."

These vessels and their stocks of highly radioactive spent fuel were, Chalmers explains, being maintained in vastly inadequate conditions and posed an extreme environmental hazard to the Arctic region. While he points out that this kind of work is more a matter of environmental protection than arms reduction – it has undoubtedly gained new impetus recently with the growth of oil and gas exploration in the Kara Sea and around the Yamal Peninsula – both are areas where the Soviet military had historically dumped notable quantities of nuclear waste.

When it comes to the UK’s most significant contribution to Russian nuclear disarmament specifically, Chalmers suggests that would probably be Britain’s involvement in the US programme to close the Zheleznogorsk nuclear reactor – which otherwise would have produced around 1.2 metric tonnes of weapons-grade plutonium each year.

"While our financial contribution may have been relatively small compared to other projects, without it the closure of the reactor may not have gone ahead at all," he says, since Congress required a certain amount of external funding to be in place before releasing US funds.

Nuclear disarmament is not, of course, solely about decommissioning existing facilities, scrapping stockpiled weapons or arranging safe disposal routes for surplus radio-active material. From the outset, it was recognised that the knowledge and technology access of newly unemployed former Soviet weapons scientists could represent a valuable potential asset to would-be nuclear states or terrorist groups.

"British scientists have been quietly working on a variety of projects to help make former Soviet states nuclear-free."

The UK’s Closed Nuclear Cities Partnership (CNCP) with the Russian Federation aims to counter this risk by creating meaningful jobs for redundant nuclear weapons personnel. Working in six of the ‘Closed Cities’ – namely Novouralsk, Ozersk, Sarov, Seversk, Snezhinsk and Zheleznogorsk – by the end of 2012, CNCP had been instrumental in launching more than 2,000 of them on new careers, along with more than 700 from institutes in other former Soviet states.

It is perhaps ironic that arguably one of the key reasons for the programme’s success lies in what the Department of Energy and Climate Change – responsible for the Global Threat Reduction Programme – describes as the UK’s own "considerable domestic experience of defence downsizing and restructuring."

Newton Hunter, a defence blogger with a particular interest in post-Cold War arms reduction, thinks it might also go a long way to explaining why the British themselves are largely unfamiliar with the work.

"Compared with Nunn-Lugar – which let’s face it, everybody’s heard about – [the] UK really has kept its light under the proverbial bushel on this, but it was a difficult one even before the recent financial crash," he says. "Knowing all about successive waves of British defence cuts and spending reviews will have given the British a real understanding of what it’s like to be on the sharp-end – but that’s probably not something you’re going to publicise."

Chalmers broadly echoes the point. "I think British threat reduction work is actually quite hard to sell to the general public."

He says that even when the UK was contributing to relatively high-profile projects, tax-payers may have found it hard to appreciate why so much of their money was being spent to help Russia fix relatively esoteric – and entirely self-made – threats, especially since by the 2000s, Russia was actually fairly well-off, and in possession of a massive sovereign wealth fund itself.

"Convincing the general public that decaying nuclear submarines in the Arctic circle was something to be concerned about may not have been easy."

It probably remains the case today; funding projects to provide gainful employment for former nuclear and biological weapons scientists might still not be particularly well received, especially given the current economic situation at home. "Although British contributions to the IAEA [International Atomic Energy Agency ] Nuclear Security Fund and the European Bank for Reconstruction and Development help towards significant projects, it is challenging to keep ‘UK Plc’ branding on the resulting work."

The UK’s involvement continues, nevertheless, with calls for bids for the 2013/14 round of Counter Proliferation Programme finance recently being announced.

What kind of work that – and other UK initiatives – will ultimately fund remains to be seen, but it seems unlikely that high-tech, high-capital projects, such as dismantling submarines, or destroying chemical weapons, will feature as highly as they have done.

With the political and financial realities so changed for both countries, now may be the right time, Chalmers suggests, to focus British efforts on capacity-building, training and the like, and strengthen the human side of disarmament.

The UK Government’s newly released Biological Non-Proliferation Programme supports research into ‘dual-use’ pathogens, biological agents that could potentially be used as weapons of mass destruction, as well as collaboration with former weapons scientists.