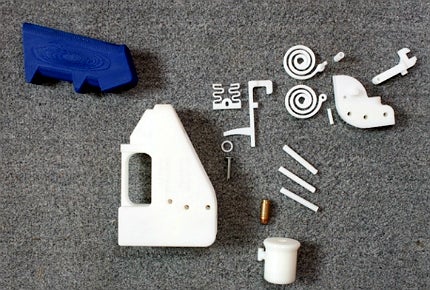 For a particular type of entrepreneur, the first question asked about any innovation is, can we make weapons using it? Self-styled crypto-anarchist and founder of Defense Distributed (DefDist) Cody Wilson, is one such individual.

Recognising the potential of increasingly affordable 3D printing technology, not to mention his desire to "defend the civil liberty of popular access to arms," thus presumably spreading crypto-anarchy, the 25-year-old law student at the University of Texas made the plans for the gun available online.

Anyone familiar with Airfix kits will be familiar with the appearance of the component parts of the Liberator, minus the surplus plastic flash from popping them out of the sprue. Just 15 plastic elements make up the weapon, plus two metals ones – the firing pin and a single screw – including complex structures such as springs. Designed to fire standard handgun rounds, the gun is also fitted with an interchangeable barrel to handle a broad spectrum of calibre rounds.

3D printers use a digital design to create a solid object by depositing tiny droplets of molten plastic layer upon layer until the shape is complete.

They were originally the preserve of design studios and prototyping and testing laboratories, but now that prices have dropped to £1,000 for a domestic model, purchasing one is no longer unattainable for the general public. DefDist distributing the gun plans meant anyone could print gun parts at home in less than an hour.

US Government shoots from the hip over gun specs

Wilson’s scheme created a stir in Europe, where gun control law in many countries makes weapon acquisition a deliberately bureaucratic process. However, the Liberator was skating on thin legal ice even in the US, where the Undetectable Firearms Act of 1988 makes it illegal to manufacture a firearm that is not detectable by walk-through metal detectors.

"3D printers use a digital design to create a solid object by depositing tiny droplets of molten plastic layer upon layer."

As a workaround, DefDist incorporates a 170g piece of steel into the body of its gun design, making it legal, but who is to say people who download the design to print their own would do the same? It may be argued that the gun’s inability to be detected using metal detectors is negated by the fact it uses a metal firing pin and regular ammunition, and modern airport scanners would detect the shape enclosed in clothing anyhow.

However, all arguments regarding its legal status became moot when, a week after its test firing results were made public, the US Department of State ordered DefDist to remove digital blueprints for the Liberator and to cooperate with an investigation to check whether the files comply with the International Traffic in Arms Regulations (ITAR).

The company complied with the order, and a disclaimer on DefDist’s website now reads: "This file has been removed from public access at the request of the US Department of Defense Trade Controls. Until further notice, the United States Government claims control of the information."

The order is believed to have come too late, as the gun specs had already been downloaded 10,000 times since going online on 6 May and the issuing of the mandate.

DefDist took on pushing the boundaries of firearms law and freedom of information and lost. Plastic guns manufactured using 3D printers are significantly inferior to the real deal, which even those aiming to acquire one for nefarious purposes can get hold of much cheaper and more easily.

For now, the only significant role 3D printers hold in the weapons industry remains creating tangible prototypes for ergonomic testing and functionality trials such as wind-tunnel experiments.