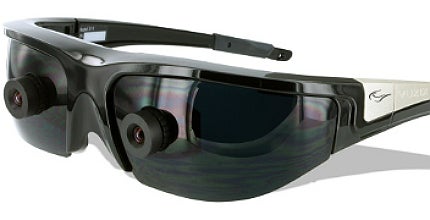 Developed in cooperation with Vuzix, a company which produces commercial video eyewear, the goggles relay information.

Friendly fire incidents have plagued military operations throughout history and became more frequent with the homogenisation of uniforms and equipment across the armed forces of different nations.

In May 2011, the Defense Advanced Research Projects Agency (DARPA) announced that it was developing augmented-reality goggles which could help prevent such incidents by giving soldiers information regarding the position of troops overlaid onto their surroundings. Developed in cooperation with Vuzix, a company which produces commercial video eyewear, the goggles relay information captured by drones alongside other situational awareness data.

Raytheon has also developed an iPhone application intended to be used by the military to track friend or foe, by showing up their positions on secure live and real-time maps.

The software, called One Force Tracker (OFT), works on a standard iPhone, enabling the soldiers to track whereabouts of allies and adversaries on maps in real time.

"In May 2011, the Defense Advanced Research Projects Agency (DARPA) announced that it was developing augmented-reality goggles."

ITT Exelis’s latest innovation for enhanced situational awareness, the i-Aware family of products, incorporates the ability to import data from external devices and display it in the NV goggles, and export the image the wearer sees. With i-Aware, soldiers can receive a wide variety of information on the goggles, such as full-motion video from an unmanned aerial vehicle (UAV) carrying out overhead surveillance, GPS map location information, or a still photograph identifying a key target individual.

Images they see can also be automatically transmitted to a unit leader or a Command and Control centre. Not only does this mean they do not have to take their eyes off the scene to look at another device, such as a hand-held computer, it also reduces the total number of gadgets carried, freeing the soldier from the bulk and weight.

Innovega was recently awarded a contract by the US Department of Defense (DoD) for the delivery of a fully functioning prototype of its virtual reality contact lenses, iOptiks, which help enhance a soldier’s normal vision with tactical information in the battlefield.

DARPA, the US Army’s mad scientist department, has announced a host of futuristic projects in its latest budget request.

The lenses, to be delivered to the US Defense Advanced Research Projects Agency (DARPA) through its Soldier Centric Imaging through Computational Cameras (SCENICC) programme, are paired with compact heads-up display (HUD) glasses which allow images to be projected onto their lenses.

The multifocal lenses feature two different filters which enable soldiers to focus on distant targets while overlaying their near vision with tactical information, eliminating the need for using bulky helmets and goggles to provide vital battlefield data.

Though many situational awareness solutions focus on dismounted soldiers, similar information is also required for armoured vehicles, enabling occupants to gather intelligence from outside the vehicle and prepare for combat, even when there is no direct view outside.

"Early trials, including an exercise carried out alongside the UK Army called Omni Fusion, saw soldiers issued with smartphones loaded with applications."

The latest systems combine intelligence, surveillance and reconnaissance (ISR) gathered from sources, such as surveillance drones, with that from sensors directly outside the vehicle in real time. Different displays throughout the vehicle can be targeted to the particular viewer, so a squadron leader could receive more tactical information from a command and control centre, whereas combatants would receive more operational data.

However, the intelligence display technology aboard army combat vehicles lags far behind that enjoyed by fighter jet pilots, according to Ted Maciuba, PE director of mounted requirements at the US Army Manoeuvre Centre.

Speaking at the International Armoured Vehicles conference in Farnborough, UK, Maciuba argued that since World War II, much new information acquisition technology has focused on the aviation side, and that man-machine interfaces (MMI) for mounted soldiers needs to meet this. Pilots have heads-up displays, virtual see-through cockpit technology and augmented reality goggles, and the mounted force needs the same capability.

According to Maciuba, the reason mounted troops lag behind is due to different economies of scale – there are hundreds of aircraft but tens of thousands of vehicles, each with crews of three or four. The technology would need to be cheaper by two or three magnitudes. 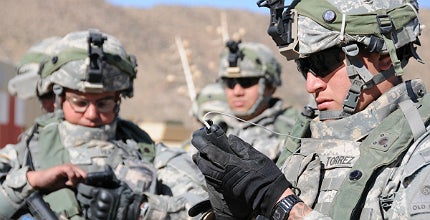 As well as being intuitive to use, smartphone solutions could also save a great deal of money.

Smartphones are already being widely used by armed forces worldwide, and one of the biggest programmes is called connecting soldiers to digital applications (CSDA), lead by the US Army Training and Doctrine Command (TRADOC).

Early trials, including an exercise carried out alongside the UK Army called Omni Fusion, saw soldiers issued with smartphones loaded with applications, including one to track each other’s movements, which they picked up with no training.

As well as being intuitive to use, smartphone solutions could also save a great deal of money – a similar large-scale project by the US Army, called Blue Force Tracker, cost millions of dollars, as opposed to just for a $200 smartphone with an app. As they come with a camera, they are also ideal for implementing augmented reality solutions.

To ensure the data security of hand-held devices, solutions are being investigated which include biometric phone access, having the phones securely access data from a cloud rather than storing any locally, plus enabling the phone to be wiped remotely if it falls into the wrong hands.

"During military operations in urban environments, audio is often a more primary sense than vision, providing a soldier with an early warning system."

To date, data-rich tactical information solutions for the military have concentrated mainly on visual data. Some of these feeds are enhanced with audio, but new US Army research aims to prove that even more information can be packed into the audio signal itself, by making it fully 3D.

Giving sound a tag – for instance a certain distinct noise meaning the movement of an enemy detachment – and giving it context in 3D space enables a soldier to react immediately without having to read a label, even when the source is behind him. It can also appear to move in accordance with sensors detecting the movement of the tracked item on the battlefield.

During military operations in urban environments, audio is often a more primary sense than vision, providing a soldier with an early warning system. However, sounds like gunshots can bounce off densely-packed buildings, giving an incorrect location, so an artificial 3D cue based on sensor readings and transmitted through headphones could eliminate this.

Research also shows that using audio cues requires little or no training compared with interpreting readouts. By giving a perceived location and directional movement that matches the actual situation, a soldier instinctively knows where to turn and look.

Incorporating more informative 3D sounds into a mixed reality (MR) display could give the most complete solution for soldier situational awareness.