With the help of detailed defence budget infographics, army-technology.com reports on the top ten spenders for 2011, covering regional spend, with special focus on Asia as well as those countries which registered the biggest increases and decreases in national defence spending. To download the full hi-resolution infographic, please click here. 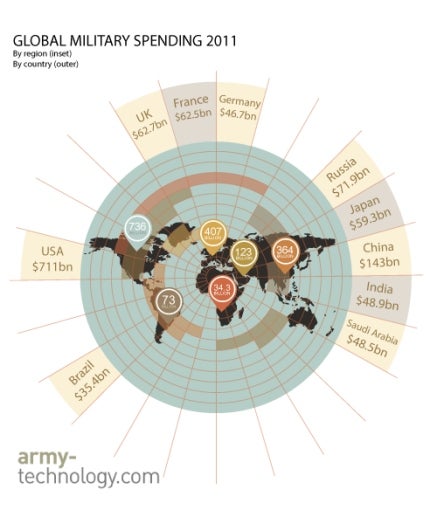 Global defence spending, according to figures from the Stockholm International Peace Research Institute (SIPRI), reached $1,738bn dollars in 2011. The figure is actually higher than that of 2010, but in real terms, the figure remained essentially unchanged, due to the falling value of the dollar and price changes. What stands out, however, is that for the first time in 13 years, military spending has not increased but in fact levelled out.

Total military spending levelling out is the result of a mixture of economic and security patterns, largely balancing a decline caused by austerity measures in the US and western Europe against substantially increased expenditure in the Middle East thanks to the Arab Spring, as well as more moderate increases in Asia, Oceania, Africa and Latin America.

According to Dr Sam Perlo Freedman, SIPRI Military Expenditure Project head, it is too early to say whether the flattening of military spending in 2011 represents a long-term trend change.

"While we are likely to see some further falls in the USA and Europe in the next few years, trends in Asia, Africa and the Middle East continue to be upward for now, and any major new war could change the picture dramatically," said Freedman.

"The after-effects of the global economic crisis, especially deficit-reduction measures in the USA and Europe, have finally brought the decade-long rise in military spending to a halt — at least for now." 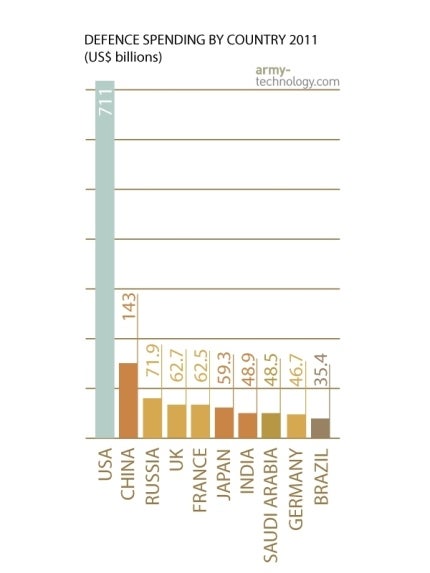 The US has unsurprisingly retained its place at the top of the world’s military spend charts, spending approximately $711bn during 2011. The figure, which represents around 4.7% of the nation’s gross domestic product, has fallen 1.2% in comparison to 2010 figures, but still represents a 40.9% share of the entire world’s defence spend. This decrease is the nation’s first since 1998, blamed partly on clashes between Democrats and Republicans over plans to reduce the US budget deficit.

China is also unmoved as maintaining the world’s second largest defence budget, whereas Russia climbs to third, ahead of the UK (for a detailed report on the UK defence budget 2012 click here) and France, who each fall one place to fourth and fifth respectively.

Russia has declared the biggest increase over the previous year’s figures, with the country’s plans to begin replacing most of its Soviet-era military equipment with modern weaponry cited as responsible for the 9.3% rise.

Prospective growth markets of India and Brazil have both cemented their positions in the list of top spenders. However, both nations have reported decreases in defence budgets, reflecting the extent of the eurozone crisis with many nations having to dramatically cap their defence budgets.

The figures for Saudi Arabia, which has fallen one position to eighth, also include the nation’s expenditure on internal security.

Military spending, by region, during 2011

The military spend by region largely fluctuates, depending on the economic state of that region. A prime example of this would be Europe, which has seen sweeping austerity measures put in place as a result of budget deficit reduction being prioritised ahead of other economic goals, with military expenditure being largely sacrificed to achieve this.

Despite this, some countries have bucked the trend and contributed towards the region’s figures, particularly the likes of Poland, Norway and Azerbaijan.

In stark contrast, Asian military spending has continued to rise, albeit at a slower rate than in recent years. This has largely been at the hands of China, which has increased its military spend by 6.7% in real terms. Excluding China, total military spending for the Asia and Oceania region has decreased by 0.4%.

Although reporting an increase in 2010, Latin America has not replicated its contribution towards military spending in the Americas after Brazil cut its discretionary military budget by 25% in an attempt to reduce inflation. Mexico, however, has seen its spend rise by 5.7% as the military becomes increasingly involved in tackling the nation’s chronic drug cartel problem.

Military spending in Asia for 2011 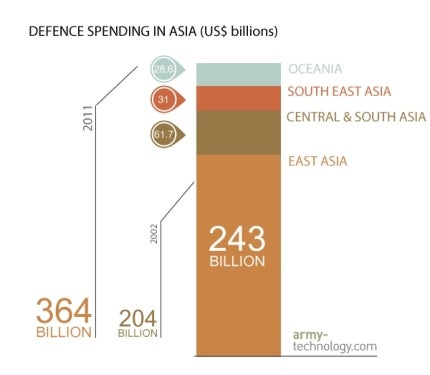 In 2011, the Asia and Oceania region saw military spending increase to US$364bn, representing a rise in real terms of 2.3% which, as in 2010, was slower than recent years. However, this is against a background of global arms spending having reached a plateau.

East Asia, specifically China, is responsible for the majority of spending in the region, with a spend of US$243bn. As a percentage of GDP, China’s share has remained steady at around two percent since 2001, so the military spend has risen in line with economic growth.

India’s spend is down 4.9% over 2010 levels, a surprising downturn after years of growth, and Vietnam has also followed suit, though it is not clear yet whether these figures are just a blip in the general upward trend. Certainly both countries are embarking on major arms purchases through programmes which will come to fruition in the next few years.

With regional border disputes historically driving spending in the region, improved accord between some countries means some countries have been able to relax their increase in funding. Taiwan, Japan and the Philippines have only seen a modest boost in spending since 2002.

However, Indonesia has seen a significant rise of 82% over the same period as it establishes a modernised armed forces to protect its territory, which is spread over a huge archipelago. Thailand and Cambodia have seen similar rises as they fund their ongoing border dispute. 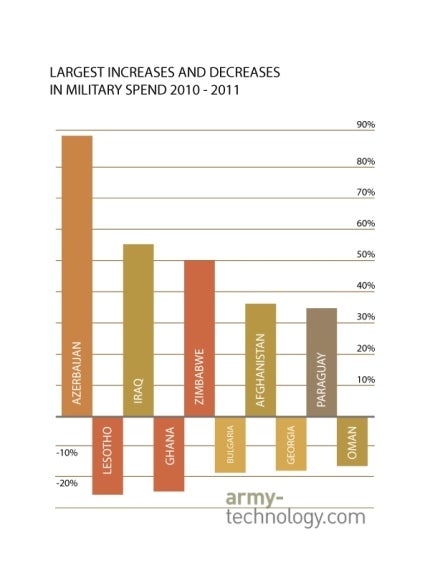 Renewed fears of conflict between Azerbaijan and Armenia over the disputed Nagorno-Karabakh region are reflected by a massive rise in spending of 89% during 2011. The tension, over land and oil, has been described as severe, with strong similarities to the Georgian crises.

Persistent wars in Iraq and Afghanistan account for the rise in spending in these regions, with the rise in Iraq spending primarily down to strong under-spending in recent years.

Zimbabwe has emerged as Africa’s biggest growing military spender, a worrying trend for a country who’s despot leader Robert Mugabe is reported to be terminally ill, with a former military commander as odds-on favourite to succeed him.

Paraguay, who reported the fifth biggest rise in spending worldwide, bucked the trend in South America with funds most likely going to border control and anti-drug smuggling activities.

Lesotho, Southern Africa’s mountain kingdom, cut spending by 24%. A likely factor was the redirection of funds towards electioneering, ahead of a May 26th vote. Ghana’s drop in spending is hard to account for given a recent deal to buy 11 offshore patrol boats with Nigeria. Protection of oil assets is more likely a higher item on the agenda then external conflict, a likely factor behind recent calls from Chief of Defence Staff Lieutenant General Peter Augustine Blay to boost interoperability and co-operation between African defence forces.

Austerity measures are behind Bulgaria’s lack of spending, with only 1.2% of GDP allocated in 2011. Nonetheless, Bulgaria’s defence minister has said he will press ahead with the acquisition of new multipurpose fighter jets.

Georgia meanwhile has undergone a period of demilitarisation following the conflict with Russia and separatist parties in 2008.

Oman – one of the most transparent states in the Gulf – has announced a budget cut of 17%, a strong trend against its Middle East neighbours arming themselves against the Arab Spring threat. Oman has instead decided to curb civil unrest by diverting resources away from weapons expenditure and towards job opportunities and civil services. 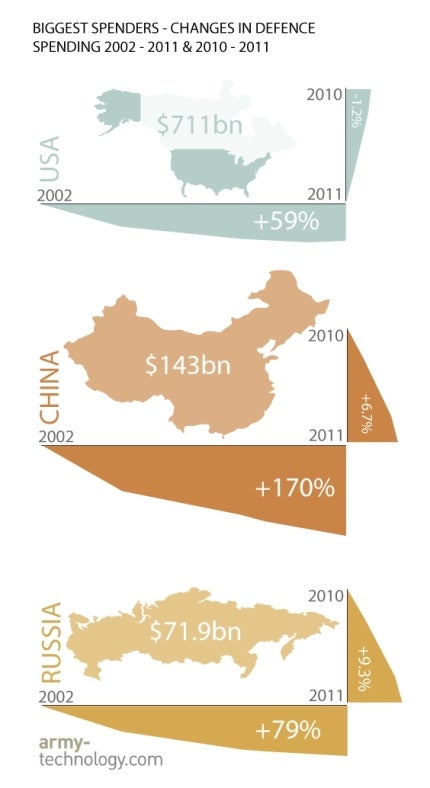