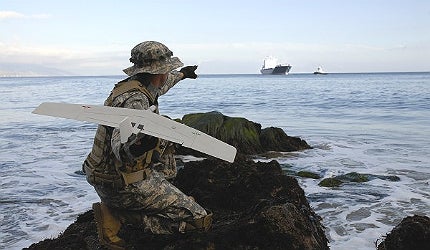 From the earliest days of military bomb-disposal robotics, their very purpose embraced the possibility that they may be damaged or destroyed during their mission, while protecting the lives of humans who would otherwise be doing the job. But the great expense involved in their development and production meant that every precaution possible was taken to make sure they returned home safely.

The latest advances in military drones, however, see them deliberately designed to contravene Asimov’s third law of robotics, which demands self-protection so long as no human comes to harm and orders are obeyed.

Military robots can now be mass-produced so cheaply that it makes more economic sense to have them crash into enemy targets rather than engage them, or to trigger bombs and mines directly rather than from a safe distance.

While targeting on-board weapons is tricky and often requires the skills of multiple operators, direct impact needs only manned or automated navigation.

"Military robots can now be mass-produced so cheaply that it makes more economic sense to have them crash into enemy targets."

Small size and stealth are obvious characteristics that aerial drone weapons must possess, so it was apt that tiny unmanned systems specialist AeroVironment was one of the first to market with its Switchblade tactical armed drone.

Switchblade is fitted with a small warhead so the aircraft acts as a remotely-piloted or autonomous guided grenade, earning it the nickname kamikaze drone.

Weighing just 2.5kg, Switchblade can be carried in a soldier’s backpack and fired from a 60cm mortar-like launch tube, its four wings springing open in the process. It has a nose-mounted camera which can be used for navigation and for providing beyond line-of-sight intelligence, surveillance and reconnaissance (ISR) data, including a live video feed and automatic feature recognition.

It can also fly to GPS coordinates at speeds of up to 85 knots, and its small size and quiet electric motor make it hard to detect, even at close range.

"Once a target is identified and locked on, its operators send a command for the unmanned aerial system (UAS) to nose-dive."

Once a target is identified and locked on, its operators send a command for the unmanned aerial system (UAS) to nose-dive towards it, with the payload detonating on impact, destroying both the target and drone.

With a number of civilian casualties being blamed on larger weaponised US drones, such as Predators and Reapers, Switchblade has been heralded as a precision strike alternative that minimises collateral damage.

What is more, Switchblade is a team player and can work alongside other drones, such as the Wasp AE micro-drone, also made by AeroVironment.

With enhanced data-gathering payloads and a longer flight time, a Wasp UAS could remain aloft, relaying information on the effects of a strike by a Switchblade while the operating unit launches further strike drones programmed with up-to-date coordinates as needed.

"The SeaFox has already proved popular with a number of other navies worldwide, including the UK Royal Navy."

The same combination of ISR and accurately targeted self-destruct capability works as well underwater as it does in the skies.

In July 2012, the US Navy deployed dozens of SeaFox unmanned submersibles to the Persian Gulf to clear it of any mines potentially laid by Iran in the Strait of Hormuz in response to increasingly stringent sanctions against its shipping. They were brought in at the urgent request of Marine General James Mattis, the top US commander in the Middle East.

Made by German company Atlas Elektronik, the 1.3m-long, 43kg vessels are guided by fibre-optics to depths of up to 300m and can travel at speeds up to six knots on missions lasting up to 100 minutes. They navigate using transponder / responder-aided dead reckoning to a programmed position, using forward-looking sonar (FLS) to relocate the positions of objects previously acquired.

Once close to the target object, it can confirm its identity using an on-board camera before detonating a large-calibre shaped charge at close range to mines or other marine ordnance, or ramming them directly.

The RQ-11 Raven is a lightweight unmanned aircraft system (UAS). It is designed for rapid deployment.

Described as a "one-shot mine disposal vehicle", at $100,000 each, this route-clearing technology does not come cheap. However, Atlas points out one advantage of its one-way fate – as it does not have to return to the launch vessel, the available mission time delivered by its non-rechargeable battery is longer.

SeaFox can be launched from a wide variety of vessels, including dedicated mine countermeasures (MCM) ships, surface combatants, craft of opportunity (civilian vessels converted into minesweepers), rubber dinghies and helicopters.

In the case of the recent Gulf action, they were deployed alongside four MH-53 Sea Dragon helicopters and four additional dedicated Avenger-Class mine sweeping ships, doubling the number previously present. The assembled task force also aims to counter the threat of Iranian midget submarines, which the US believes Iran could use to lay the mines, potentially in the path of its aircraft carriers.

Pentagon officials estimate that Iran has an arsenal of 2,000 mines. Even if it deployed them all in an effort to close the Strait of Hormuz, the US Navy and its allies would be able to clear it in five to ten days using SeaFox, mine sweeping vessels and similar technologies. The SeaFox has already proved popular with a number of other navies worldwide, including the UK Royal Navy.

The call for kamikaze drones: a new breed

Recent military action has battled asynchronous warfare, where advanced military technology has struggled to win out over insurgents prepared to die as they take enemy combatants with them.

Mining of waterways can be carried out en masse, and separate mine-detection and explosion or deactivation efforts can prove time consuming when ensuring a completely safe path is often urgent.

In both cases, a new breed of self-destructing robot, perhaps better described as a remotely-operated weapon or kamikaze drone, designed for one mission only, might be the way ahead, ready to be destroyed in action but save lives as it does so.