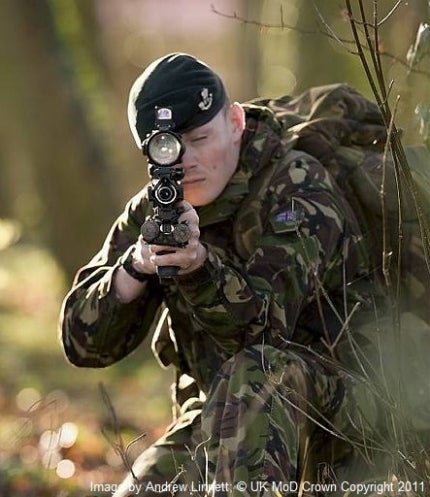 Nearly 40 years on, in Afghanistan, as forces face asymmetric foes over wide expanses of open terrain, as well as in confined urban settings, where non-combatant civilians often form unwilling human shields, the sniper’s value as a key battlefield asset has once again come to the fore.

The UK’s £11m Sniper System Improvement Programme is possibly the most high profile example of this, providing British snipers with a comprehensive, cutting-edge equipment package which includes state-of-the-art sights, laser range finders and a new rifle – designated the L115A3.

Manufactured by Accuracy International and known commercially as the AWSM, the L115A3 long range rifle is a bolt-action weapon, chambered for the .338 Lapua Magnum (8.59x70mm) round and weighing in at 6.8kg – only slightly heavier than the UK’s standard 7.62mm Nato-firing L96 sniper rifle.

Although it delivers less energy on impact than the larger .50 BMG (12.7×99mm Nato), with a muzzle velocity of 936m/s, the rifle’s 8.59mm bullet shares a similar trajectory and resistance to deflection or wind drift, while easily outperforming the lighter 7.62 calibre’s ballistics, particularly beyond 800 metres.

Topped off with cutting edge, day and night / all weather sighting systems, in the right hands, the L115A3 makes a lethal weapon at ranges in excess of 1,100m, and it seems, when fortune smiles on the sniper, it can perform considerably better even than that. The L115A3 was the weapon used by the Life Guards squadron’s Corporal of Horse Craig Harrison to kill two Taliban machine-gunners with consecutive shots in Helmand province, at a confirmed distance of some 2,475 m – clinching the world record for long distance shooting in combat.

Within truly urban scenarios, for instance, sniper-fire cannot be allowed to over-penetrate for fear of collateral damage to innocent citizens within nearby buildings, which clearly rules out heavy calibres – but when the enemy must be engaged at intermediate ranges, the standard 5.56mm round may lack the necessary kinetic energy to be effective. The 7.62 Nato cartridge is the obvious compromise, but in this type of combat, it is not just a question of the ammunition. The rifle – and the rifleman too – needs to be different.

In most of the world’s armies, the sniper rifle is a bolt-action. Despite decades of development and huge improvements in reliability, semi-automatics have traditionally been viewed as less accurate and less dependable.

Two trends have emerged from this particular melting pot – a new breed of semi-automatic rifles, chambered for the 7.62 Nato round, which perform with near bolt-action accuracy to around 1,000 metres, but can also be used effectively in street fighting, and the rise of what the US calls the ‘designated marksman’.

These soldiers – and their British ‘sharpshooter’ counterparts – are not full snipers in the conventional sense, but highly trained, crack-shot infantry soldiers, intended to bolster accurate, long-range firepower on the front line.

Although the details differ, the basic design spec remains essentially the same – a ten or 20 round magazine, versatile, all-condition sighting systems, 16 to 20 inch barrel and a range of lights, bipods and other available accessories, designed to help the sharpshooter meet the unique demands of the role.

While many ‘standard’ sniper rifles feature sophisticated sound suppressor systems, muzzle brakes and flash hiders, the added length and bulk they typically introduce tends to make the weapon too cumbersome and unwieldy for confined built-up areas. As the new concealable subsonic / supersonic suppressed sniper system (CS5) from McMillan shows, the solution could be subsonic.

Equipped with a precision Anschutz trigger and capable of delivering 0.75 minute-of-angle accuracy, with both the company’s own 200 grain subsonic load and full-power, match grade ammunition, the CS5 can fill either the role of a dedicated subsonic weapon or traditional sniper rifle, as operational circumstances dictate.

Defence procurement is a notoriously unpredictable thing, but even if the CS5 does not ultimately join the likes of the DSR-1 and the VKS on the inventories of the world’s specialist military and police units, it would be surprising if some of the thinking behind it does not influence the rifles which do. Equally, it seems, the lessons learnt from complex challenges in Afghanistan will be helping to shape the sniper’s art, and equipment, for some time to come.