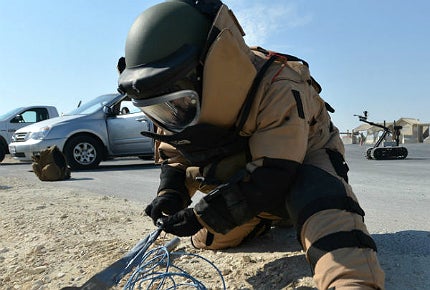 In March 2003, combined forces from the US, the UK, Australia and Poland invaded Iraq under the auspices of Operation Iraqi Freedom. At first, the allies appeared to sweep all before them. In three short weeks of conventional warfare, Saddam Hussein was ousted and the capital Baghdad was captured.

Yet, despite vast superiority in military resources and manpower, ten years and an estimated 150,000 casualties later, total victory remains elusive.

One of the reasons for this is the protracted insurgency by militant guerrilla forces within Iraq and Afghanistan. Terrorist groups, acting either in isolation or sponsored by one or more nation-states – and backed by a substantial infrastructure and support system – have become skilled practitioners of asymmetric warfare – and their weapon of choice remains the improvised explosive device (IED).

"This year, nearly 1,900 US casualties have been caused by IEDs," Lt Gen Michael Barbero, head of the Joint IED Defeat Organisation (JIEDDO), told a US Senate subcommittee in December 2012. "I believe the IED will continue to be the weapon of choice against our forces and we must remain vigilant."

Desperate to stay one step ahead of the roadside bombers, US Department of Defence (Dod ) experts are now experimenting with ultra-wideband (UWB) microwave radar, a leading-edge medical diagnostic technology developed to locate malignant tumours.

Research into landmine detection using UWB radar took place in the UK during the Falklands conflict in the early 1980s and in the US in the aftermath of the Gulf War a decade later. Military research programmes in Germany, France and Russia followed, but it is only now, in the wake of pioneering research into the feasibility of UWB microwave imaging for early-stage breast cancer detection, that the subject has started to gain serious traction on both sides of the Atlantic.

"UWB radar has emerged as the technology of choice for improved landmine detection."

UWB microwave imaging uses the measurement of the transmission of microwave energy through an object to define its dielectric (insulating) properties. Put simply, by subjecting tissue to signals from across the radio spectrum at a much wider range than traditional X-rays, scientists at the University of Wisconsin-Madison in the US have been able to contrast normal fatty breast tissue with malignant tissue. This not only makes it possible to identify extremely small malignant tumours, but also to differentiate between benign and malignant growths.

Military chiefs hope to adapt the technology to detect IEDs in the field. A recent declassified NATO report on research into hand-held, stand-off vehicle-based and airborne detection systems outlined some of the current and future engineering challenges affecting IED detection, recognition and identification using UWB microwaves.

"Vehicle-based systems have been developed that use arrays of antennas and generate 3D data, which is then processed to provide a rolling map of detections."

However, the report also noted that impediments such as rocks and other debris significantly affected the performance of UWB systems and that handheld UWB detectors, such as the US Army’s Minehound scanner, were limited thanks to a single pair of antennae.

"The ground contains significant levels of radar scatterers such as stones, animal burrows as well as man-made detritus and, consequently, radar encounters extremely high levels of clutter at short ranges," the report noted. "Overcoming this as well as achieving an adequate signal / noise ratio is a major technical challenge."

The US Defence Advanced Research Projects Agency (DARPA) has earmarked a portion of its annual £2.8bn budget for research in order to overcome these and other hurdles.

The 18-month Methods of Explosives Detection at Standoff (MEDS) programme, for which the solicitation is currently out for bidding, is intended to develop techniques that can detect IEDs deeply embedded in substances such as mud, meat or animal carcasses – i.e: opaque substances with high water content that cannot be safely and effectively probed using existing methods.

"DARPA has earmarked a portion of its annual £2.8bn budget for research in order to overcome these and other hurdles."

Through MEDS, DARPA hopes to pioneer solutions that can detect bulk explosives in such substances using non-contact methods. In this context, that means detecting (but not necessarily imaging) explosives embedded at a depth of 5cm or greater. To protect the health of the operators, the tools developed will not use ionising radiation, with the possible exception of X-ray backscatter.

"MEDS technologies may require new engineering and physics," said Dr Judah Goldwasser, MEDS programme manager. "DARPA does not believe that incremental enhancements to existing imaging technologies will be adequate to meet the programme objectives. However, the building blocks for a solution are in place, as we’ve seen in several recent scientific breakthroughs."

Countermeasures and the future of IED detection

Since its inception in 2006, JIEDDO has spent in excess of $6bn developing IED countermeasures, while the US military has experimented with everything from lasers and mine-detection robots to chemical scent detectors and man-portable radio-frequency jammers, all aimed at mitigating the evolving IED threat to US warfighters in-theatre. UWB radar is the latest weapon in the fight against an ever-resourceful enemy.

In Afghanistan, militia groups such as the Taliban continue to employ with lethal effect homemade bombs incorporating a range of innovations including remote-control detonation, long command wires and pull-cords, radio-controlled devices (RCIEDs) and booby traps, such as pressure plates with metallic saw blades. In 2012, IEDs, many constructed using potassium chloride as well as ammonium nitrate fertiliser sourced in Pakistan, accounted for 60% of US casualties in Afghanistan.

"The IED will continue to be the weapon of choice against our forces and we must remain vigilant."

In September 2012, 33,000 additional US troops ordered to Afghanistan by President Barack Obama to counter Taliban attacks left, leaving 68,000 US troops as part of a Nato force of more than 100,000. By the end of 2014, 13 years after they first arrived, US and Nato troops will officially withdraw, leaving only a ‘light footprint’ of roughly 10,000 American troops to pursue counter-terrorism efforts, and train and advise Afghan security forces.

According to JIEDDO’s Lt Gen Michael Barbero Barbero, when US troops began pulling out of Iraq, IED attacks increased. Worryingly, he believes the same could happen during the next 24 months in Afghanistan.

"I’m concerned, like we saw in Iraq, as we draw down forces situational awareness drops," he warned. "Frankly, your movements on the road become more predictable."

In light of this assessment, research into countermeasures such as UWB radar remains a key weapon in the fight to protect warfighters from the very real threat posed by IEDs and hidden ordnance.