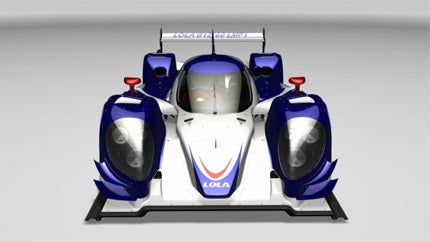 With the 2012 Formula One (F1) season under starter’s orders, motor racing fans are being treated to the spectacular speed that can only be achieved through ground-breaking manufacturing techniques and novel materials.

These same advances are now finding their way on to the frontline, as companies with a motorsport heritage apply their advanced design and development methods to revolutionising the development of military systems.

“Lola worked on BAE Systems’ Mantis UAV programme, building fuselage structures and using innovative tooling to help them take it to market within a two-year programme.”

Close ties between the motorsport and defence industries are easy to see, as many of the requirements for armoured vehicles are shared with those of racing cars. Occupant safety in dangerous conditions is paramount, as is maintaining light weights through the use of innovative materials for optimum speed and to save fuel. Unmanned aerial vehicles (UAVs) can also benefit from motorsport’s resilient, lightweight composite materials which enable them to stay aloft for longer.

Motorsport vs. defence – lighter in weight and turnaround

Unlike traditional military systems development, which can become mired in time-consuming red tape and approval procedures, motorsport companies rely on an ability to deliver solutions to incredibly tight timescales in time for the next race. The UK Ministry of Defence (MoD) is now turning to these racing specialists with the aim of delivering resilient, lightweight vehicles, systems and components to a much faster timescale.

The new approach was influenced by former UK defence secretary Paul Drayson, an active competitive driver in contemporary and historic car racing. He complained to the industry body, the Motorsport Industry Association (MIA), that an urgent operational requirement (UOR) to replace a broken spring hangar on the first tranche of the Mastiff armoured vehicles was going to take three months. This contrasted to the motorsport world, where a car’s entire suspension system could be replaced between races just one week apart.

Since then, a number of motorsport companies have successfully won military contracts, to deliver track-proven vehicle systems and structural components for UAVs and radars. For some motorsport companies, bidding for military contracts means their newly-found defence wings have expanded rapidly to overtake their original racing business. Two such examples are the Lola Group and Lifeline Fire & Safety Systems.

Based in Huntingdon, Cambridgeshire, Lola Cars has a 54 year motorsport heritage, supplying vehicles and services for Indy, A1 Grand Prix and Le Mans-style races.

Commercial Director Paul Jackson said: “We carry out all the design and tooling internally, then we build the cars from start to finish using tools like finite element analysis, computational fluid dynamics, a wind tunnel, a seven-post rig [a piece of test equipment used to perform technical analysis on race cars] and a full engineering team.”

“These advances are now finding their way on to the frontline, as companies with a motorsport heritage apply their advanced design and development methods to revolutionising the development of military systems.”

Over the past 14 years, Jackson has aimed to build up the business in non-motorsports sectors, using the motor racing side as a demonstrator for the company’s capability for quick turnaround and innovation.

After providing tooling aids for Bombardier to build composite wings for the Learjet 85 and the C-series commercial air vehicle in Belfast, Lola pursued work on military UAVs. Lola worked on BAE Systems’ Mantis UAV programme, building the fuselage structures and using innovative tooling to help them take it to market within a two-year programme.

“We like to embed ourselves with the design team at the very start of the programme so that we build something that’s manufacturable using the skill base,” explained Jackson.

Lola also worked with Elbit Systems in Israel, providing the tooling for the Hermes 450 UAV. This led to the company opening a dedicated facility for the Watchkeeper UAV, manufactured by U-TacS, an Elbit / Thales joint venture, based on the Hermes.

Looking to the future, Lola is working with Hybrid Air Systems on the long endurance multi-intelligence vehicle (LEMV), a football-pitch sized hybrid airship which Northrop Grumman is developing for the US Army.

“We did all the design and analysis work for the massive basket structure that sits underneath and we’re involved in the bow thrusters and some other structures,” said Jackson. “We’ve had three-star generals visiting. This is an exciting project which I’m hoping they’re going to build on.”

Outside of UAVs, Lola is involved in producing the BAE Systems Samson multifunction radar for the Type 45 destroyer, the Artisan 3D radar system and EADS Astrium’s mast-fitted radomes for frigates.

Jackson believes Lola’s motorsport heritage means the company can offer a unique set of skills to the aerospace and defence industry.

“We offer speed to market, speed to theatre – speed to the ‘track’ in motor racing terms – innovation and being proactive with a different mindset,” he said.

“We have a true end-to-end capability, so someone can come to us with a rough design and we take this from design and engineering through to tooling, component assembly, painting and testing.”

The knowledge exchange works both ways, and Jackson said that Lola has improved its knowledge of safety systems from the defence industry.

“While a racing car doesn’t fly – you can just park it if it goes wrong – you’re still building a safety cell for someone to travel round a track at 200 miles an hour,” he explained. “Our cars help to save lives, so I think some of the military quality standards have improved on what we already had.”

So successful has Lola been in its aerospace and defence contracts that motor racing now constitutes only 25 to 30% of its business, plus defence work offers a stable base of work throughout the year, whereas the motor racing world is very cyclical. Looking to the future, the company plans to carry out further work on the latest generation of UAVs, viewing composite-based military vehicles as a growth area and reviewing opportunities in the renewables market.

Whereas Lola has the tooling systems and composites expertise to turn its hand to a variety of aerospace and defence applications, Lifeline Fire & Safety Systems has a specialist niche, making its name as the biggest supplier of fire suppression systems.

“Like Lola, Lifeline has found the balance between its motorsport and defence businesses has shifted, with 65% of the company now dedicated to defence.”

Managing Director Jim Morris setup Lifeline in 1993 for providing fire safety systems worldwide to a range of motorsport categories from Formula 1, World Rally, Paris Dakar and Le Mans, all the way through to grass-roots club level.

“In this industry you have a manufacturer such as Lola Cars who build a car for a championship, or a series, and we negotiate and cover the specification with them, then build Lifeline equipment into their car which they then sell,” explained Morris.

Seeing that military armoured vehicles have a very similar requirement for safety systems to racing cars, Morris enterprisingly rebranded the company as a defence contractor and took an exhibitor stand at the major defence fair, Defence Security and Equipment International (DSEi) 2007.

“I said we make fire extinguishers for racing cars and that can’t be much different from an armoured fighting vehicle, as the objective is still to protect the vehicle but most importantly protect the occupants,” said Morris.

“Foxhound is our first full new vehicle build and our systems are integrated into the vehicle, rather than adapting something to go on an already existing vehicle,” said Morris.

Because of Lifeline’s motorsport background, its Zero 360 series fire suppression systems are designed to deliver efficiency and performance in a particularly lightweight and compact package.

“With the Foxhound project, packaging has been really important as it is a relatively small, highly-packaged performance vehicle, and the advantage we have is being able to use our motorsport expertise and develop a small, lightweight product for them.”

Like Lola, Lifeline has found the balance between its motorsport and defence businesses has shifted, with 65% of the company now dedicated to defence.

“It has reshaped the business dramatically to the point that I’ve now separated the two disciplines,” said Morris. “What I have found is that we can get a bit too tied up in the defence bureaucracy and that has an adverse effect on our motorsport philosophy, and I cannot allow the red tape to hamper our motorsport development.”

Being designed for enclosed environments, Lifeline’s fire suppression systems are also suitable for use in submarines and aircraft, with the company considering involvement in projects for both. The company is also addressing new threats, such as battery fire with the advent of the new lithium technologies and solid-state batteries, which are considered flammable and volatile. It runs its own full-time R&D and test facilities to support these new developments.

Though the speed of delivery and design of the target systems may be different, the motorsport and defence industries are tightly linked by their dedication to protect the occupants of their vehicles and users of their systems.

“We’re very proud to be supplying to that market sector and helping make a difference in theatre when you regularly hear horror stories from the front line,” said Jackson.

“While motor racing has glitz and glamour, being able to support our guys and girls in theatre in challenging conditions is a bit special and we’re very proud to be part of that.”