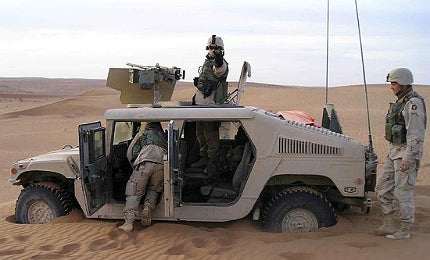 When coalition forces entered Afghanistan as part of the War on Terror, few active servicemen were familiar with such demanding terrain. As operations commenced, it became clear that vehicle engineers hadn’t either. Stories emerged of US Army HMMWVs becoming stuck in the desert sands as their wheels became lodged, forcing the army to reconsider their involvement entirely.

Now, there is a burgeoning understanding that vehicles tasked with force protection need to be able to adapt to conflicts that are increasingly changing. Without this adaptation, vehicles stuck in sand dunes could quickly become the least of the US Army’s problems, as adversaries quickly advance their own technology and make use of territorial advantages.

“Stories emerged of US Army HMMWVs becoming stuck in the desert sands as their wheels became lodged.”

Speaking at the Making the Difference in Force Protection seminar in November 2012, Dstl Armour Capability leader John Hunt placed great emphasis on international research collaboration. Benefits from such collaborative efforts are clear, with the UK being able to leverage research into areas that it cannot afford to pursue alone. Theoretically, future systems will also benefit from collaboration as they stand to be more open towards interoperability as understanding and coherence improves.

The UK / US Armour Memorandum of Understanding was originally a Cold War-era heavy armour protection approach, which is now working to boost survivability of personnel in lightweight platforms from an underbelly or side attack. Conflicts in both Iraq and Afghanistan, where IED attacks were commonplace, demonstrated the necessity for such a rethink.

Now, the Armour Technology Working Group meets regularly to openly exchange information at all classification levels, with staff exchanges also taking place on a regular basis. The outcome of such collaborative research has been the facilitation of a significant number systems fielded by the US and the UK.

Military vehicle cooperation since the 1950s

“The outcome of such collaborative research has been the facilitation of a significant number systems fielded by the US and the UK.”

Similar to the Armour Technology Working Group is the Technical Cooperation Program, comprised of five nations committed to establishing a collaborative understanding with regards to the development of future vehicles. Originally established in 1957, the group started with the Prime Minister of Great Britain and the US President signing a declaration of Common Purpose to combine resources and share tasks.

Canada then joined a year later, forming the Tripartite Technical Cooperation Program (TTCP), before Australia and New Zealand completed the line-up in 1965 and 1969 respectively. By then, the group was renamed as the Technical Cooperation Program, with it now consisting of 80 technical panels with 1,350 scientists and engineers. Furthermore, 170 organisations are included across 450 sites, with 300 active work strands currently being investigated.

With a collaborative effort outlined, Hunt moved to acknowledge the future challenges that will shape the force protection vehicles of the future, tied with exterior influences. Technological advances continue to happen at pace, with the civil sector taking an increasing lead in developing key technologies. These factors, coupled with development times, planners are forced to think in the long term – 20 to 30 years in the future – while also considering wider political and economical change.

“Conflicts in both Iraq and Afghanistan, where IED attacks were commonplace, demonstrated the necessity for such a rethink.”

This can prove to be a challenge in itself, as while budget cuts are almost certain, their extent is entirely dependent on the continuing severity of the economical crisis and how ‘fairly’ these budgetary cuts are spread across all factions of the armed forces. However, certain factors can be predicted with relative accuracy.

Future conflicts are, according to Dstl planners, likely to take place in built-up areas, dubbed “cluttered and contested environments”, against opposition with access to technology that matches our own. Media penetration is likely to enable the public to know precise details of military actions, while a blur of the civilian-combatant distinction is likely to occur within such built-up warzones.

Adversaries are expected to possess threats combining conventional, irregular and high-end asymmetric forces, while utilising a mix of state-assisted and asymmetric techniques to exploit weaknesses and constraints. One particular constraint cited by Hunt is the need for coalition forces to minimise and avoid collateral damage, with conflict increasingly occurring in complex terrains shared with innocent civilians.

Technology evolving to meet this threat 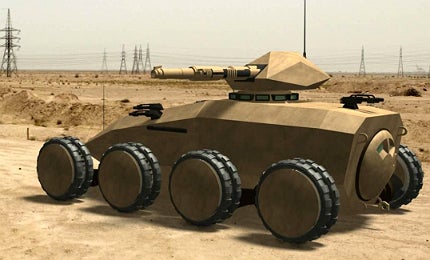 In order to respond to such an evolving series of threats and environments, new technology has to be capable of escalating and de-escalating quickly, with UAVs, cyber warfare and the increasing use of remote operation cited as avenues that are likely to shape future force protection.

Hunt cited technological advances including direct brain-machine interaction, synthetic biology, quantum computers and metamaterials as a number of possible avenues of exploration, with the rise of 3D printing a possible means of manufacturing.

Robots are expected to play a huge role, used to fulfil the “dull, dirty and dangerous” tasks that dismounted soldiers either cannot do, or are eager to pass off. Automation such as this could be used to reduce a crew’s work load, with the US Army’s experimental LS3 (otherwise known as AlphaDog) robot a prime example of such technology currently in development.

Fuel efficiency is also likely to play a huge role within the future shape of force protection, with ground forces responsible for a major source of fuel use within the armed forces, although alternative energies could be more of a longer term solution.

Other areas of development cited by Hunt include active protection systems, such as reactive armour or the use of IR-decoy flares; electronic counter measures and signature management as a means to increase survivability.

“Robots are expected to play a huge role, used to fulfil the “dull, dirty and dangerous” tasks.”

International research collaboration has been cited as critical to the UK’s science and technology plan, as it allows Dstl and other bodies to leverage value from various avenues of research that the UK simply cannot afford to conduct all at once.

What has become clear, Hunt indicates, is that emerging technology cannot be looked at in isolation and must be viewed in the context of a wider system, with open systems architecture now considered a vital element for any future vehicle. Its ability to allow the latest technology to simply be inserted, rather than painstakingly retrofitted, offers ‘greater agility’ for acquisition procedures and through-life upgrades, meaning that future vehicles could respond better to emerging threats than vehicles of the past and present.

Rather than having vehicles troubled by the sand and mountain ranges of Afghanistan, the future could seem them merely fitted with equipment purposefully designed for such terrain prior to deployment, and then re-fitted for urban combat as and when the need arises.

With its armed forces undergoing something of a renaissance, Iraq has, since the toppling of Saddam Hussein’s regime, inched towards something resembling normality.