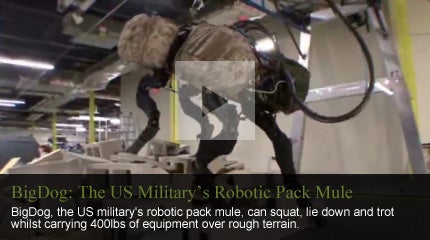 Increasing load weights placed on dismounted warfighters have become a burden on the modern soldier, tasked with carrying a vast array of equipment and batteries in order to fulfil operational requirements. With this beginning to exceed 100lbs, the performance of the dismounted soldier has been degraded.

The BigDog robot, labelled as a military robot mule, has subsequently proven its potential worth in its ability to reduce load and remove that burden from a soldier’s back.

BigDog, the world’s most advanced beast of burden

Although the principle purpose of the robot, dubbed BigDog because of its motion resembling that of a dog, is to carry loads of up to 340lb in rough terrain, various equipment added to the robot has increased its capabilities.

A stereo vision system, consisting of a pair of stereo cameras mounted into the ‘head’ of the robot, has been integrated alongside a light detecting and ranging (LIDAR) component in order to allow it to follow a human lead, but also to record and store intelligence gathered through its camera.

"Exciting advances in robotics and movement have thrust the BigDog into the forefront of high-tech soldier support vehicles."

In order for the multiterrain BigDog to navigate the rough environments it could be subjected to, the stereo camera system, supplied by the Jet Propulsion Laboratory and integrated into the ‘head’ of the robot, can be combined with vision software in order to produce an accurate 3D model of the terrain.

This model enables the robot to identify a safe path forward, but can also enable BigDog to calculate the distances of any gaps or caverns and whether or not they could be cleared safely with a jump. In laboratory testing, the BigDog successfully jumped 1.1 metres with a full payload.

The robot can also estimate the ground plain of rough terrains using a history of leg kinematic data and odometry which is recorded and stored in the onboard computer, whilst using traction control in order to avoid, detect and recover from foot slips on uneven surfaces.

"The BigDog robot, labelled as a military robot mule, has subsequently proven its potential worth in its ability to reduce load and remove that burden from a soldier’s back."

Built onto the actuators are sensors for joint position and force, and movement is ultimately controlled through an onboard computer which manages the sensors.

Approximately 50 sensors are located on BigDog. These measure the attitude and acceleration of the body, motion and force of joint actuators as well as engine speed, temperature and hydraulic pressure inside the robot’s internal engine. Low-level control, such as position and force of the joints, and high-level control such as velocity and altitude during locomotion, are both controlled through the onboard computer.

As a result, BigDog has a range of locomotion behaviours and speeds that can be demonstrated. Through control of its four legs, the robot can stand up, squat down, walk with a crawling gait, trot with a running gait and even bound in a gallop gait. Although the average speed for a trot is approximately 3.5mph, BigDog exceeded 7mph while bounding in laboratory testing.

Control without a leash

"BigDog must be able to demonstrate its ability to complete a 20 mile trek within 24 hours without refuelling while carrying 400lbs."

The BigDog is controlled by a human operator via an operator control unit (OCU) that communicates actions to the robot through IP radios.

The operator controls have been placed into a single vest which comprises a 900Mhz broadcast antenna, radio, steering controller interface and head mounted display unit, powered by a battery.

The operator uses the OCU to instruct the robot on high-level steering and speed, guiding the robot along its designated path. Other instructions include start or stop, squat and the various speeds at which it can operate. The visual display provides operational and engineering data, but only high-level input is required in order to control the robot’s movement.

The continued evolution of the BigDog has lead to the development of the legged squad support system (LS3), also known as AlphaDog. The refined equivalent has been designed by Boston Dynamics to exceed the BigDog in terms of capabilities and use to dismounted soldiers.

DARPA, which has continued to support the programme, has recently carried out the first outdoor exercise on the latest variation of the LS3 with it successfully demonstrating its full capabilities during a planned hike encompassing tough terrain.

Following the success, an 18-month plan has been unveiled, due to start this summer, which will see DARPA complete the overall development of the system and refine its key capabilities, ensuring its worth to dismounted warfighters before it is rolled out to squads operating in theatre.

The BigDog must be able to demonstrate its ability to complete a 20 mile trek within 24 hours without refuelling while carrying a load of 400lbs, whereas a refinement of its vision sensors will also be conducted.

DARPA is also experimenting with the addition of new capabilities:

DARPA programme manager Lt. Col. Joe Hitt said: "If successful, this could provide real value to a squad while addressing the military’s concern for unburdening troops. LS3 seeks to have the responsiveness of a trained animal and the carrying capacity of a mule."

Do you think BigDog could be a soldier’s best friend? Tweet your thoughts to us @Army_Technology. Please include hashtag #Bigdog

As reality mimics Hollywood science-fiction, the US military are experimenting with exoskeleton body armour suits. Liam Stoker explores the world of exoskeletons and uncovers just how close we are to having our very own Ironman future soldiers.