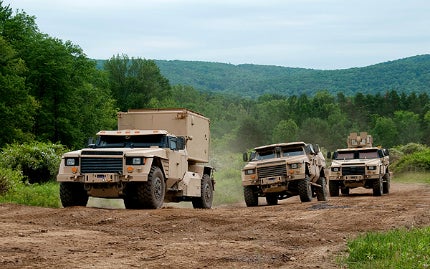 Being in charge of the US Army’s equipment budget in the current economic climate is not a job many people would choose, and producing a wish-list of cutting-edge gear that may never get the requisite funding must be frustrating at best, futile at worst.

The significance of the challenge was not wasted on US Army Chief of Staff General Ray Odierno or Secretary of the Army John McHugh, who wrote in their introduction to the 2014 Army Equipment Modernization Plan: “We can never know with certainty what lies ahead, but it is clear that the army must be capable of conducting many missions, at many speeds, in diverse environments, all while maintaining a decisive advantage over any adversary.” They then add: “This is a time of hard decisions and prioritisation.”

The report emphasises equipping the individual soldier and squad in a changing strategic environment that may increasingly see the US Army changing its role towards policing civil unrest and ensuring the delivery of humanitarian need in new theatres. Given the uncertainty, new equipment must be versatile, taking into account Joint, Interagency, Intergovernmental and Multinational (JIIM) and Coalition interoperability, and be scalable.

“Shock and awe” remains a favourite US military tactic, and maintaining an arsenal of the latest equipment may just deter adversaries even to a point of preventing combat. Behind the scenes support has not been forgotten, and the plan gives special mention to non-combat functions, such as intelligence and logistics, and reducing the training and maintenance burden of new equipment.

The report sets out the most important programmes, many already underway, that will support the US Army’s objectives over the 2014 financial year and the immediate future. When it comes to the crunch, these are the critical pieces of kit least likely to face the chop.

“Maintaining an arsenal of the latest equipment may just deter adversaries even to a point of preventing combat.”

The US Army has embraced modern communication technology, recognising its value to bind an individual to his squad, and two-way contact with a command centre. First among these is the US$1.3bn Warfighter Information Network-Tactical (WIN-T) programme to provide communications across a broadband backbone, supporting telephone, data and video.

“The US Army has embraced modern communication technology, recognising its value to bind an individual to his squad.”

One of the plan’s architects, Brig. Gen. John G. Ferrari, director, joint and futures, Army G-8, highlighted the necessity for an upgrade, saying the chassis of an M113 is basically an aluminium box, which soldiers used to armour with sandbags.

It is also not configured for adding network gear and does not have enough power to also carry medical equipment.

Designed to replace the Humvee, the US$84.2m Joint Light Tactical Vehicle programme will provide five models of four-wheeled armoured fighting vehicles that are more survivable and carry a greater payload.

The US$257m Kiowa Warrior (KW) programme will supply the OH-58D Kiowa light, armed reconnaissance helicopter to support ground troops, and upgrade rotorcraft to the OH- 58F model by providing enhanced cockpit and sensor capabilities through the Cockpit and Sensor Upgrade Program (CASUP). The upgraded model, which first flew in April 2013, will extend the design’s service to 2025.

To ensure new equipment is not delivered into a void but instead integrates with other new and established kit, the plan groups requirements into ten different portfolios: soldier and squad; mission command; intelligence; ground and manoeuvre; aviation; indirect fires; air and missile defence protection; force protection; sustainment (transport) and general sustainment.

“Finally, Ferrari says Odierno highlights not the technology, but the driving force behind it.”

To ensure these are fully supported, Ferrari said Odierno has identified three priorities as guiding principles behind the plan.

He recognises soldier and squad as the first priority for the army going forward, ensuring that even as budgets feel the squeeze, the combatant on the front line will carry the latest in lethality and protection. This includes the provision of the XM-25 Counter Defilade Target Engagement (CDTE) system – an air-burst grenade launcher nicknamed The Punisher, enhanced night vision devices, improved small arms and better tactical parachutes.

Second comes mission command, supported by the network group of programmes, to enable soldiers to instantly access the information they need to carry out the mission on hand.

Finally, Ferrari says Odierno highlights not the technology, but the driving force behind it.

“Always remember, we’re the US Army,” he says, “and we have to remain prepared for decisive action, to fight and win in a large conflict, because that’s what the army’s all about.”

Odierno and McHugh end their introduction to the report with the same questions echoing through the halls of government defence procurement departments worldwide: “The ultimate success of our efforts will not be known for some time. But the measure is simple: will soldiers in the years to come have equipment needed to dominate our enemies? Will they have the necessary tools to achieve our nation’s aims?”

And along with their cutback-hit peers worldwide they may silently add: “Will we actually have anything like the budget we’ve calculated against when it comes to placing orders?” Having a plan does not mean Congress is ready with an open cheque book.