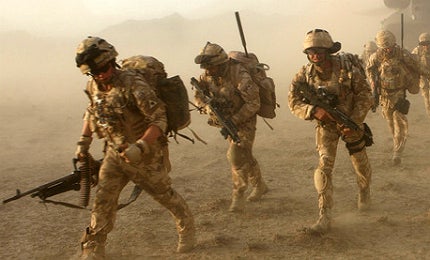 Optimising size, weight and power (SWaP) is the keystone to delivering effective systems carried by dismounted soldiers, and the batteries and charging systems that power these devices are vital to getting that balance right.

Despite weight-reduction initiatives, dismounted soldiers in Afghanistan regularly carry up to 110lb of equipment, up to ten percent of which can be batteries to power the ever-growing array of electronic equipment needed for modern warfare. To reduce this load and maximise the mobility of troops, alternative power solutions have been a key focus of all solider modernisation programmes, but to date few innovations have lasted in the battlefield beyond product trials.

The bottom line is that soldier-borne innovations succeed or fail based on whether they are convenient for the soldier to carry and use, and offer some improvement over existing alternatives. Plugging equipment into a backpack solar charger or having to carry discharged rechargeable batteries back to a forward operating base might prove an inconvenience too far for the overburdened infantryman. And without a single consistent solution that works across all the equipment carried, the soldier risks having to carry even more.

So what is the state-of-the-art in portable power technology, and which of the evolving solutions is most likely to be found powering future soldier equipment?

"Despite weight-reduction initiatives, dismounted soldiers in Afghanistan regularly carry up to 110lb of equipment."

When military contractors look to shed bulk from equipment, they often turn to motorsport manufacturers, which invest millions in saving every gram that could make the difference to being first past the chequered flag, and batteries are no different. BAE Systems is testing technology developed with motorsport specialist Lola for its suitability in defence applications.

These so-called structural batteries use multifunctional materials which amalgamate rugged composites with standard battery chemistries to store energy in complex 3D structures that could constitute the body of the device itself. These can be recharged in the same ways as traditional batteries, whether by plugging into the mains supply or using a solar charger.

The new batteries had been only been demonstrated to date in unmanned aerial vehicles (UAV) and a basic torch, but BAE Systems believes they have a future in any application that batteries currently fulfil, with reduced weight and bulk, with the added opportunity of forming part of the bodywork of new devices. Lola plans to use the new technology to power its Lola-Drayson B12/69EV, which it hopes will be the world’s fastest electric car.

The flexible technology can embrace a number of different battery chemistries and composite materials. Initial versions use nickel-based battery chemistry in carbon fibre or glass-reinforced plastic, but exactly the same principle could be applied to lithium-ion or lithium-polymer chemistries incorporated into other materials, including flexible fabrics that could be made into power-source uniforms and tents.

Charging on the battlefield

While structural batteries have some years to go before they are proven for the battlefield, some innovative solutions have already enjoyed success. In February, the US Army placed a follow-on order with Arotech Corporation’s Power Systems Division for 1,500 units of its Soldier Wearable Integrated Power Equipment System (SWIPES).

As these types of batteries are more power-dense than traditional ones, Arotech claims SWIPES reduces battery weight by 30% and extends mission time. The company must be doing something right – as well as earning repeat orders, the US Army named SWIPES one of its top ten greatest inventions of 2011.

The military is also investigating whether compact energy provision technologies used in other equipment could be adapted for soldier systems. Fuel cells have enjoyed success powering small-sized independent equipment such as UAVs and robots, but have not been widely adopted for soldier-borne systems, because of safety and supply-chain concerns. Hydrogen is the most commonly used fuel, but they can also use hydrocarbons such as methanol.

Logistics operators have got around this by keeping fuel cells at forward operating bases and using them to recharge traditional batteries when soldiers return to base. Transporting flammable gases and liquids to the front line to recharge the fuel cells is problematic, so some companies are looking at ways to create fuel in the field using freely-available raw materials and solar power. Recent research has been looking into using widely-available diesel in fuel cells, but there is some way to go until the technology meets sufficient maturity.

Battery weight reduction is a key element of the British Ministry of Defence’s Defence Equipment and Support (DE&S) reducing the burden on the dismounted soldier (RBDS) initiative, to upgrade equipment while managing the soldier’s burden, and the mass and power of equipment.

"The bottom line is that soldier-borne innovations succeed or fail based on whether they are convenient for the soldier to carry."

One of the major barriers to a single powering solution is the fact that soldiers can carry up to ten different batteries in electronic countermeasure systems, radios, weapon sights and targeting systems, each with its own cables and charging systems.

The initiative has to date delivered a selection of technology from ABSL Power Solutions, including compact batteries with improved power management, solar panels and the soldier portable charger (SPC). ABSL’s SPC is designed to harvest power to recharge batteries on the move from a wide variety of AC or DC power sources available in-theatre to eliminate the need to carry spares. Sources include solar panels, vehicle batteries or partly discharged conventional batteries. So successful was ABSL’s technology that the original 2010 order for 75 solar panels and SPCs was increased to 645 in April 2011.

Running up to 2015, the next phase seeks to improve on the 2kg power system weight reduction achieved to date, and will add to ABSL’s power scavenging success by increasing the energy efficiency of equipment and batteries, including the introduction of a man-worn power and data distribution system.

Power for the future

"BAE Systems is testing technology developed with motorsport specialist Lola for its suitability in defence applications."

So what does the future hold for soldier-carried power? Based on the evolution of soldier systems to date, it is unlikely that the technology of any single nation, let alone international initiatives, is likely to settle on a single solution. Also, faced with the wide variety of theatres in which soldiers operate, no single solution will be able to cater for all combinations of fuel, sunshine, vehicles and equipment used.

Soldiers say the main thing they want from their in-field power sources is a reliable lifespan. If a battery pack claims power a night-vision system for the duration of a 12-hour patrol in the dark, it can literally be a matter of life and death if it only lasts eight hours.

For now, the onus remains on the power systems manufacturers to develop exceptionally versatile, consistent solutions that can be adapted for a variety of batteries, connectors and patrol demands. Soldiers can at least heave a sigh of relief that their battery burden is set to reduce year on year, but in line with every past trend, every ounce saved on batteries is likely to be replaced with increasing numbers of new gadgets to carry.