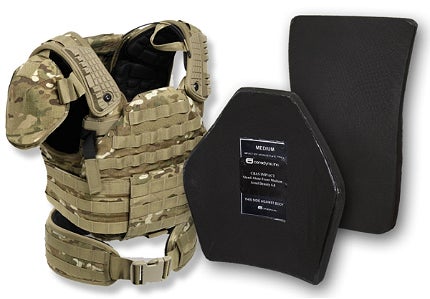 Compared with many other military sectors, the body armour market has historically been one of the most consistent. A new Strategic Defence Intelligence report, “The Global Body Armour and Personal Protection Market 2013-2023″, confirms this, showing worldwide demand is set to grow slowly but steadily in the next ten years.

According to the report, the market is expected to be worth US$2.4bn in 2013 and to increase to US$3.7bn by 2023, representing a compound annual growth rate of 4.58% during the forecast period.

Although the growth may be dependable over time, an unprecedented set of circumstances is conspiring to upset the apple cart. The US military, which has the biggest budget in the world, is by far and away the biggest customer for body armour, and is expected to account for 40.9% of the global market in the next decade.

However, sequestration on top of already severe budget cuts, a significant reduction in combatant numbers and the drawdown from Afghanistan mean a drop in demand of as much as 50 to 60% in some programmes, which will see armour manufacturers feeling the pinch.

Three major contributors to the sector offered their insight into the prospects for the near future military body armour market.

“Although the growth may be dependable over time, an unprecedented set of circumstances is conspiring to upset the apple cart.”

Honeywell produces Spectra fibre, a high modulus polyethylene fibre which is one of the lightest, strongest fibres in the world, which can be converted via a patented process into an advanced unidirectional composite ballistic material known as Spectra Shield.

Tim Swinger, who manages the Honeywell Advanced Armour Composites division, explains: “If you take Spectra fibre and weave it like clothing, that type of structure is not as effective in ballistic protection as the unidirectional configuration we use to optimise ballistic performance.”

Honeywell incorporates Kevlar fibre from DuPont and Twaron fibre from Teijen into its unidirectional composite technology, to create a family of products known as the Goldshield.

The US has been a reliable market for Honeywell, mainly through supplying ballistic inserts for the Enhanced Small Arms Protective Insert (ESAPI) programme, but Honeywell has recognised demand is on the downturn and is casting its net further afield to an impressive degree.

“We sell vests and plates to the Australia Defence Forces for primary soldiers and Special Forces,” says Swinger.

Swinger says Honeywell is a technology driven company that invests heavily in research and development, with an ongoing goal of improving performance by ten to 20% every few years.

“We’re always trying to drive performance up and take weight out,” he says. “When you reduce weight for soldiers in terms of a helmet, face protection or breast plate, you effectively become an enabler for them, allowing them to be more mobile. Arguably, Spectra Fibre has only reached 40 to 45% of its capability, so it could become even stronger and make lighter equipment.”

Singer says that despite a difficult year or two for the armour market, Honeywell has recognised a slight uptick in enquiries.

“There’s still enough danger out there that the long term trends in this industry from a business perspective are still good,” he says.

3M is an innovation-focussed company with a global reach. Before it acquired ceramic armour specialist Ceradyne last year, it already produced helmets through its personal safety business, and it now has the capability to fully address the military market, mainly through the US military’s demand for Small Arms Protective Insert (SAPI) and Enhanced SAPI (ESAPI) armour plates.

“We’re vertically integrated into ceramics, which is our key material technology and processing technology for body armour,” says company president and general manager Mark Colin. “In helmets it’s all about ultra-high molecular weight polyethylene material, similar to the materials that go into the backing of body armour, but processed very differently.”

Acquiring Ceradyne couldn’t have come at a better time for 3M, as while the drawdown from Afghanistan saw US armour demand diminishing, a new door opened for the company. 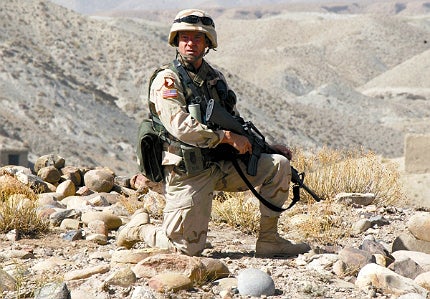 “One really important contract for us has been a $40m Foreign Military Sale (FMS) contract to provide SAPI to the Afghanistan Government in March,” says Colin. “Beyond a good piece of business it will enable the Afghan military to take over the security of their own country equipped with the most modern equipment.”

As well as 3M’s international reach, Colin believes the company’s focus on innovation through its 46 different technology platforms will help see it through a tough time for the armour market.

“What’s important in terms of the military is thinner, lighter, lower cost, stronger – all the things that these 3M technology platforms bring,” he says. “Even in a really challenging environment for defence funding, if we bring real innovation we’re going to be successful.”

One demand 3M is interested in pursuing is the US military’s Enhanced Combat Helmet programme, under which Ceradyne was awarded a contract to produce an initial 3,850 helmets for the Marine Corps in July 2013.

“Although initially just for Marines, eventually production costs will drop and they may become available to more soldiers on the ground. It’s a real advance versus what they have now,” says Colin.

BAE Systems’ US subsidiary has been producing soft armour, hard armour inserts, helmets and load carriage equipment for the US military for upwards of 15 years. It also produces the next-generation XSAPI, which is similar to the ESAPI but offers a greater level of ballistic protection, and the ESBI and XSBI side ballistic inserts.

“On soft body armour side, we have had contracts for the Improved Outer Tactical Vest (IOTV), the primary vest used by the army, since its inception,” says Rob Monks, director of business development for BAE Systems’ Protection Systems group.

“We chose to evolve another line of products that offers a little more cut-out in the arm and throat area to offer more mobility for Special Forces,” says Monks. “It’s a bit lighter and offers a bit less coverage, but that’s the trade-off of coverage versus weight.”

Indefinite delivery, indefinite quantity (IDIQ) contracts with the US military remains the bread and butter of BAE Systems’ body armour business, with recent key contracts including the US Marine Corps lightweight helmet and the improved outer tactical vest, ESAPI and MOLLE for the army. But BAE Systems personal protection products go beyond body armour.

“Our personnel protection business incorporates armoured helicopter seats, and our main customers are the OEMs that make the helicopters. We’ve done a lot of business in Europe and Asia, markets we’re also targeting for body armour” says Monks.

BAE Systems prides itself on its R&D efforts, and although liquid armour developed by BAE Systems’ Advanced Technology Centre and quickly dubbed “bullet proof custard” by the media has yet to find a practical application, other technical advances are doing well in the field. The company delivered the second generation of its Head-worn Energy Analysis Diagnostic Systems (HEADS) to the US Army in January.

“Over the two generations, we’ve delivered more than 40,000 HEADS and the army is very happy with the data they’re getting,” says Monks. “They use a third party to analyse the data which will help them to figure out how to best protect soldiers and keep track of injuries.”

Outside of the US, BAE Systems has identified a trend for system-level integration, mainly through future soldier systems programmes.

“We’re trying to make sure all the pieces work together and actually fit on the warfighter correctly so it’s not an additional burden to them,” says Monks. “We’re doing our own internal R&D, and although some countries lack huge production orders, they are identifying money to help contractors undertake development efforts to get their product optimised for the next conflict.”

Affordably enhancing the performance to weight ratio of body armour may be what body armour manufacturers are working towards, but their ultimate goal is very simple.

“We’re saving lives, that’s what everyone in this business is trying to do,” says Colin. “One soldier said it was 112 degrees out there and if we had the old-style armour I never would have worn it, but thank God I did because something happened.”