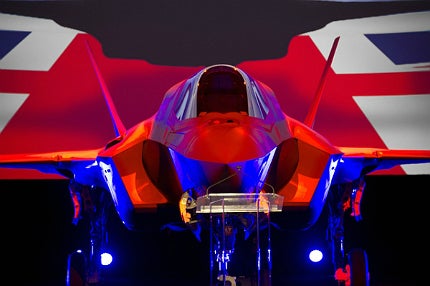 For an aircraft still undergoing test and evaluation, F-35 has quite a history. For every new country expressing an interest, another is downsizing its orders due to delays and cost overruns.

As the biggest partner in the programme after the US, the UK watches every market move with baited breath, as the success or failure of the programme will have a direct influence not just on our fighter jet fleet but on British jobs and, ultimately, the economy.

The question muttered in boardrooms and parliament alike is: Is the F-35 good for Britain?

While news that the British economy has grown a fraction of a percentage point more than forecast continues to underwhelm, progress and vastly improved financial predictions for the UK’s new carrier aircraft, the F-35B, have failed to hit headlines altogether.

"As the biggest partner in the programme after the US, the UK watches every market move with baited breath."

Dithering over which variant to purchase and soaring initial costs were often dismissed as essential international compromises, but now the programme is back on track and coming in as significantly more affordable, programme partners have chosen to celebrate all that’s British about the F-35.

During a presentation at the recent Defence and Security Equipment International (DSEI) expo in London, a board showed the Lightning II, as it’s known to its friends, divided into its component parts like a beef joint chart in a butcher’s window, giving some indication of just how British the aircraft is.

From industry giants such as BAE Systems, which manufactures the air fuselage and structural components, and Rolls Royce, which makes STOVL roll ducts, to niche manufacturers like Survitec Group, which makes the pilot flight equipment and Martin Baker which makes the ejector seat, slice the F-35 any way you like and there’s a Union Flag running through it.

In total, 500 UK-based manufacturers contribute to F-35, not counting their down-chain suppliers.

He added that UK suppliers provide 15% of the component parts of every one of the 3,100 models that would be produced.

"In total, 500 UK-based manufacturers contribute to F-35, not counting their down-chain suppliers."

These manufactures have formulated efficiencies and supply chain stability between them have dropped the cost of the 235 units currently delivered or on order by 35%.

O’Brien added that the programme was projected to generate 24,000 high-tech jobs in the UK through to 2039, generating a significant export revenue and domestic income.

"The F-35 will fulfil the vision of the UK Government of being the next great fighter in the UK," O’Brien concluded.

He said that three aircraft had been delivered to the UK and are currently undergoing tests at the USAF Eglin Air Base, by RAF and USAF pilots. On the 70th anniversary of the Dambusters operation, the significance of RAF 617 Squadron being selected to be the first to operate the aircraft was not lost. They will work alongside Royal Navy 809 Squadron at RAF Marham when it is delivered.

Dunne said he expects to place the first order in the next few months, though he was unwilling to be more specific on date or actual number. He said he would be able to confirm the first significant order numbers by 2015.

"The cost is coming in better than estimated," he said. "Despite what is said by doubters in the media, we will be paying the same price as the US Marine Corps and we are working together to bring down the cost."

With manufacturers from the mighty BAE Systems and Rolls-Royce through to specialist SMEs like RE Thompson and Martin Baker gathering to sing the praises of the programme and the boost it is already bringing to local and national jobs and economy, we may finally be reading some good news about a defence programme with a significant injection of great British know-how.

The F-35 Joint Strike Fighter is a ‘turkey’, according to Pierre Sprey, one of the designers of the highly-successful F-16 Falcon and A-10 Warthog aircraft.

"It’s inherently a terrible airplane because it’s an airplane built for a dumb idea," Sprey lamented in an interview last year. That ‘dumb’ idea is the concept of using one aircraft as a multimission fighter, a key selling point for the F-35.

"The F-35 Joint Strike Fighter is a ‘turkey’, according to Pierre Sprey, one of the designers of the highly-successful F-16 Falcon."

Although this is highly contested by those working on the project, it is clear that the multimission F-35 is becoming a very expensive turkey indeed. The US Government Accountability Office (GAO) said in June that the JSF’s unit cost estimate had jumped from US$81m in 2001 to an eye-watering US$161m in March 2012. The F-35B STVOL version could be as high as US$200m.

The aircraft is also beset by delays from the myriad of problems the programme has encountered. Just last month, the Pentagon inspector general’s office released a report which identified 343 quality issues with the F-35 programme.

Much of the delay has been attributed to the decision to concurrently manufacture the F-35 while development and testing is ongoing. It is estimated that it will cost nearly US$1bn to retrofit the older F-35 models with newer upgrades. Because of this, the production of hundreds of aircraft has had to be deferred to allow proper testing to be carried out.

These delays are not only damaging to the US – the US Navy ordered additional F-18s in 2010 to mitigate for the capability gaps caused by the F-35 delays – but also international partners which have thrown in their lot with the F-35. The biggest partner being the UK, which, by injecting US$2.5bn into development costs, is the only ‘Level-1’ partner.

Unlike the US, Britain has not been able to mitigate for the delays in the F-35 programme. Its sole naval jet aircraft, the Harrier GR9, was retired in 2010 along with the Royal Navy’s aircraft carriers. The UK has still not committed to buying a set number of aircraft in a certain timeframe – the current figure is just 48 – which has protected it in some respects, but also increased uncertainty and questions about overall cost.

The biggest risk for the UK remains cost. Increasing unit costs means a large fleet of F-35s to fly off the new Queen Elizabeth aircraft carriers will remain an admiral’s dream. Simply put, a substantial F-35 fleet will be unaffordable for an already cash-strapped government.

Worryingly, the UK also lacks a contingency plan if in the worst-case scenario the F-35B is cancelled. There really is no plan-B for the F-35B.

"Although the development is proceeding and aircraft are flying, if the B-version should suffer some sort of major developmental problem and the US were to cancel it then, of course, the UK would have two aircraft carriers with nothing to put on them," explains Royal United Services Institute professorial fellow Trevor Taylor.

Because the government chose to build a STOVL-based carrier (with no cat and traps), it automatically tied them in to the B-variant.

The decision to revert back to the F-35B in 2012 – going back on a previous decision to procure the F-35C in 2010 – meant the ‘lock-in’ was complete, according to Taylor. After all, the F-35B is now the only new-generation STOVL aircraft available. Britain is now fully committed to the F-35 programme – whether it likes it or not.

"Would the UK take this route again?" asks Taylor. "I suspect it wouldn’t."

Very few major defence programmes have progressed to deployment without a few hiccups along the way, and F-35 is by all accounts bigger than most, and with more international interest. Some of the defence equipment most widely praised during development has rapidly turned out to be a white elephant, while others that encountered niggles along the way have taken the opportunity to come back stronger with all the defects ironed out.

The UK has taken on a huge risk as the second biggest partner to the US in the F-35 programme. This means it has some of the benefit of being able to influence the direction it takes, while never quite having the heft of its US home. Whether Britain proves to be the B in F-35B that makes it great will be a matter for history to decide.

Most military robots draw on mechanical models as a means of locomotion – tracks, wheels, fixed wings, helicopter rotors and propeller screws – but whole new groups of robotic agents are now evolving, inspired by the world of nature.