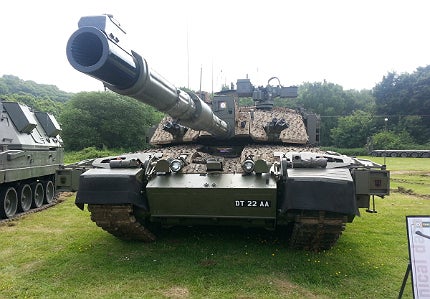 Brigadier Robert Talbot Rice is very much the British Army’s go-to armoured vehicle guy. He heads a team of 300 experts, overseeing fleet projects worth £10bn in the next ten years and £350m this year alone.

They are also responsible for overhauling vehicles purchased under Urgent Operational Requirements (UOR) for Iraq and Afghanistan ready for incorporation into the core fleet.

What Rice describes as his top Category A projects are the Scout SV programme, the manned reconnaissance part of the Armoured Fighting Vehicle (AFV) pipeline, and the Warrior Capability Sustainment programme (CSP), which aims to upgrade the current Warrior Infantry Fighting Vehicle to meet the British Army’s current and future requirements.

“He heads a team of 300 experts, overseeing fleet projects worth £10bn in the next ten years and £350m this year alone.”

“Both of those are in the demonstration phase, one of them about two and a half years in and the other about a year and a half in,” says Rice. “This is the time when you have to tackle some tricky issues.”

At the concept stage and still offering what Rice calls “room for manoeuvre” is the Life Extension Programme for the Challenger 2, to replace obsolescent components and sub-systems on the Main Battle Tank (MBT).

“We’re considering whether to do it as big bang or more incrementally over time, which is quite attractive to the army because it means a few more birds in hand a bit sooner,” says Rice.

Another project at a sufficiently early stage to offer wiggle room is the Armoured Battlefield Support Vehicle (ABSV) programme, which Rice describes as “Warriors with the top down”.

While the Warrior CSP programme, under contract with Lockheed Martin, will provide Warriors with a new 40mm turret, an initial 65 of the remaining 300 will be fitted with winch and crane attachments to carry out field repair and recovery roles.

“Why would you not make use of these pretty good armoured vehicles?” says Rice. “If you could sort these out, you could save money on Bulldogs and have better command and control elements based on Warrior.”

But what about the wider Utility Vehicle programme? “The army is still getting its head around these and just how many it needs to meet the requirement,” says Rice.

“My view is we will probably try to meet that requirement in a number of different ways through ABSB, some more Foxhound for one end of it, maybe some more Scout. Then there will be an irreducible minimum where we say yes, there is a new programme and we need some new 6×6 or 8x8s, and that’s one of the key parts of the programme.”

Army 2020 and the return to contingency

While Army 2020 plans dominate future requirements, the drawdown from Afghanistan means the army has to prepare for a return to contingency status and the associated incorporation of vehicles purchased under Urgent Operational Requirements into the general fleet.

“The drawdown from Afghanistan means the army has to prepare for a return to contingency status.”

“We’ve got Warriors, Combat Vehicle Reconnaissance (Tracked) CVR(T) , Challengers and Bulldogs all brought in under UORs, which are all being taken into core over the next few years. In a short time, those entry standard platforms will provide the basis of our contingent capability until the other programmes like Scout and Warrior CSV and Challenger roll out and equip the force from the 2020s out.”

Given that these UORs were made necessary as the existing fleet was unsuitable for recent theatres, and future conflicts could take place over radically different terrains, there is pressure on future vehicles to be more modular and adaptable.

“We’ve learned a lot of lessons,” says Rice. “We designed our current fleet around a very narrow range of challenges presented by Germany, so the temperature ranges and the threats were built around the enemy we perceived we faced then.

“Flexibility and adaptability are now built in. So the Scout requirement, for example, is built around a much wider temperature range and will offer modular and adaptable armour so that it can adjust to different conditions. The difficulty is that these big projects can take ten years, but at some point you’ve got to say the design is frozen.”

Alongside supporting such a wide-ranging fleet, Rice’s top priorities include those facing armies feeling the pinch worldwide; personnel and finding efficiencies.

“One of my big priorities is keeping my team equipped with the right sort of skills and people and retaining them – that’s important in DE&S,” he says. “We’re short of a good slice of people with certain skill sets, which is a problem as it limits our ability to do this job.”

In terms of efficiencies, the DE&S is working with army HQ on understanding exactly what money is being spent on, taking stock of inventory and eliminating unnecessary items, ironing out overlaps in job function and all the while aiming to meet sustainability targets.

It automatically monitors each vehicle returning to base from operations and identifies whether it needs any repair or service.

One final way to cut through-life costs into the future is to share the outlay with other nations through improving the exportability of platforms.

“It’s something that the department has been bad about historically,” admits Rice, “but there are some good export angles with some of the programmes.

“Scout is going to produce a world-class common-base platform, with a highly exportable hull that customers can equip differently, for example as an ambulance. We also need to think about exporting the Utility Vehicles. Whatever vehicle the British Army endorses, it gets that gold seal of approval.”

Over the years BAE Systems has produced many iconic and game changing defence technologies, but not all have made it past the drawing board.