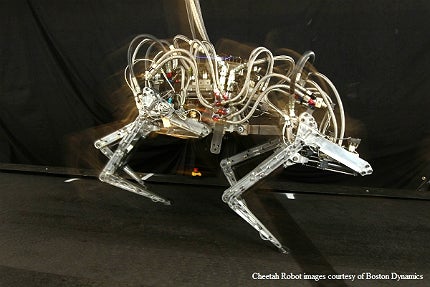 Biomimetics – using biology as the basis for new technologies – is scarcely a new idea in defence research. It has been a feature for decades, and has already led to the development of a range of innovative solutions for a number of problems, from inhibiting biofouling on ships, to corrosion prevention in fighter jets.

Applying the idea to robotics, however, could see the shape of military robots change – in a very literal sense – forever, and their deployed capabilities and usefulness enormously enhanced.

There is already an impressive roll-call of devices that can flap, wriggle, swim and run their way around, including among others, AeroVironment’s ‘Nano Hummingbird’, Israel’s robot snake, the US Navy’s ‘Mantabot’ fish drone and Boston Dynamic’s ‘Big Dog’.

That list is set to get even bigger, as the focus increasingly falls on bio-inspired designs. The US Office of Naval Research alone funds significant research into biomimetic autonomous undersea vehicles, micro air vehicles and humanoid robots, and other defence departments run similar programmes – so what makes biology such a force in robotic locomotion?

“There is already an impressive roll-call of devices that can flap, wriggle, swim and run their way around.”

“Animals have been optimised over millions of years and solutions to many complex engineering problems could be found in nature. That’s why bio-inspired design in general and bio-inspired robotics could be very beneficial for coming up with solutions for problems in the engineering world that have remained unresolved for decades,” says Hamidreza Marvi, research assistant at the Georgia Institute of Technology, and one of the team behind the Scalybot robo-snakes.

Scalybot1 uses the concertina-like locomotion of snakes, while Scalybot2 replicates their rectilinear motion, where waves of muscular contraction travelling along their stomachs enable them to crawl, the angle of its scales changing automatically to achieve this, but neither mimics a reptile’s appearance.

Many other robots, however, demonstrate the well-established tenet of bio-morphology – that form follows function – and in copying an animal’s movement, come to mirror its physical features too. Arguably few do so more than the likes of Big Dog and his kennel-mates at Boston Dynamics.

As CEO and company founder, Dr Marc Raibert explains there are good reasons for that. “Existing wheeled and tracked vehicles are quite limited in where they can travel on rough terrain, yet people and animals can travel almost anywhere on foot. So we are interested in the use of legs to build rough-terrain vehicles that have the mobility of people and animals.”

He says the Legged Squad Support System (LS3) – with its four legs and remarkable rough-terrain capabilities – is a great example of that.

Designed to go anywhere ground forces can go on foot, and capable of navigating to designated locations using GPS and terrain sensing, or automatically in ‘follow-my-leader’ style using computer-vision, LS3 avoids the need for a dedicated driver, and can carry up to 400lbs (180kg) on a 20-mile / 24 hour mission.

Developed by a world-class team from Boston Dynamics, Carnegie Mellon, the Jet Propulsion Laboratory, Bell Helicopter, AAI Corporation and Woodward HRT, and funded by DARPA and the US Marine Corps., LS3 is currently in the second year of a two-year field testing phase.

Evolution has naturally tended to make biological movement ergonomic; as a general rule, animals use their appendages and bodies in energy-efficient ways to avoid squandering often hard-won food resources.

The logic of adopting the same idea for machines to ensure maximum performance from their own limited on-board fuel or battery supply is clear, but making robot agents physically resemble their real-life counterparts has an added advantage that is only recently beginning to be exploited.

If they look like the herd, they can hide in it – and pass unnoticed. It is an approach which has found particular resonance with marine and aerial robotic design.

Realistic micro unmanned aerial vehicles, such as the ‘Nano Hummingbird’ – a mere two-thirds of an ounce (19g) in weight and with a six-and-a-half inches (16cm) wingspan – could revolutionise covert air surveillance, while Virginia Tech’s ‘Cyro’ robot jelly-fish is the ultimate in marine stealth, wrapped up in five-and-a-half feet (1.7m) of electrically-driven artificial jelly.

These intelligence gathering activities evidently make an additional case for perfecting bio-inspired locomotion, but achieving animal-like movement in robots is not simply about emulating the mechanical systems of bone and muscle with hydraulics and high-tech materials.

“We expect to create versions of Cheetah that work outdoors in terrain, and as time goes on these robots will go longer distances.”

In nature, a whole range of receptors help living organisms coordinate and control their movement, and bio-inspired robots must mimic them too. Proprioceptors keep animals aware of their bodies’ changing orientation as they move and help them balance, exteroceptors give awareness of external stimuli and internal receptors help maintain homeostasis – keeping bodily organs and systems in a balanced state for optimum functioning. All of these specialised biological receptors have extensive robotic analogues – as Big Dog clearly illustrates.

The robot’s basic proprioception is provided by linear pots which monitor joint displacements in the knee, hip and ankle, load cells which measure forces in the legs, and current sensors. Stereo vision then additionally provides information on ground slope, while also collecting data about the robot’s surroundings, so it can avoid obstacles, and a series of on-board gyros complete the exteroception package, measuring angular rates and linear acceleration.

The parameters may be different, but the ethos remains fundamentally biological and with Marvi suggesting that new bio-inspired sensors will play a key role in the next wave of robot development, that mechanical / biological convergence would seem destined to get closer.

“The more work we put in to advanced robots, the more they accomplish,” Raibert says – and that is clearly an ongoing process.

Last year his company built a Cheetah robot with four legs and an articulated back. That was a lab prototype that ran at 30mph on a treadmill. “With more work, we expect to create versions of Cheetah that work outdoors in terrain, and as time goes on these robots will go longer distances and travel faster.”

Perhaps the ultimate test for bio-inspired locomotion, however, will be to mimic ourselves – and DARPA’s six-foot-two and 290 lbs (1.88m/130kg) Atlas robot, developed by Boston Dynamics, has already made a good start towards that.

Approximating to human form, Raibert says it will eventually be able to perform the same sort of tasks as humans, using its legs for mobility and its arms / hands for manipulation. “The Atlas anthropomorphic robots we are building will evolve over the coming years to have more agility, dexterity and rough-terrain capability, and be able to perform a growing variety of tasks.”

One thing is clear; the way military robots look – and move – is going to be very different from now on.

Bomb-sniffing bees – taking the sting out of landmines

The use of sniffer dogs by security forces to detect explosives is well-established, but dogs are not the only creatures with a nose for explosives.