In recent evidence, given to the Defence Select Committee, General Dynamics Land Systems – UK and Lockheed Martin UK both laid some blame for delays to their programmes at the door of the CT40 cannon.

However, in evidence to the same enquiry KNDS – a consortium of Nexter and Krauss-Maffei Wegmann (KMW) – advertised the cannon as a solution for a turreted Boxer Mechanised Infantry Vehicle (MIV).

The CT40 Cannon was mandated by the Ministry of Defence (MOD) for both AJAX and Warrior CSP.

In France, Nexter’s Jaguar, part of the country’s Scorpion land vehicles programme, uses the same weapon as AJAX and Warrior CSP. Jaguar was contracted in 2014 and is due to enter service at the end of this year. France is also working on three other systems using the CT40 Cannon, including a rapid fire naval version.

So, why have UK vehicles faced delays while France has progressed at speed? 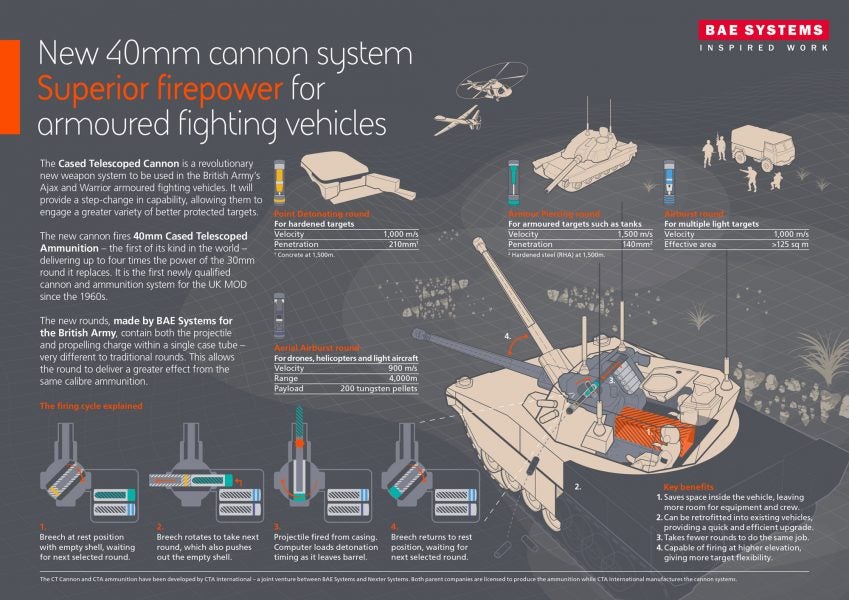 The adoption of the full system is part of the reason that Nexter has had success with Jaguar, while the UK has faced delays.

In the development of its turret for Warrior CSP, Lockheed Martin did not take all the components from CTA International, instead choosing to develop its own ammunition handling system that feeds from the side rather than the bottom of the weapon.

The Ammunition Handling System (AHS) for Warrior CSP and the Lockheed turret was contracted to Meggitt, with the latter awarded a production contract for the AHS in 2015.

Between 2006 and 2008, the UK and France contracted CTA International to conduct two technical demonstrator programmes (TDPs) of the cannon, to demonstrate to turrets – the crewed ‘Manned Turret Integration Programme’ (MTIP) and uncrewed turret (TOUTATIS).

Nexter told Army Technology that both of these trials were conducted on Warrior Infantry Fighting Vehicle (IFV) chassis and were ‘specifically’ aimed at addressing the ‘integration risks’ of the CT40 cannon.

Nexter added that as a direct result of these trials, the company chose to adopt the entire CT40 system, including all the components listed above. The French company said that Jaguar benefited from the trials by leveraging the risk reduction achieved by the 2006 and 2008 trials.

In the development of its turret, Lockheed Martin told Army Technology that in order to ‘[achieve] required fire control system performance and safety’ the company chose to develop its own ‘integrated systems’ from UK suppliers. The company added that this allowed them to develop a modular system used on both AJAX and Warrior CSP.

For CT40, MOOG is the supplier of the gun-laying system, and worked on the earlier CT40 qualifications in 2006 and 2008 for the MTIP and TOUTATIS demonstrators. On the integration front, Nexter is understood for Jaguar to have done this all in-house.

The company told Army Technology: “Nexter is a system company. We know turrets, medium calibre to main battle tanks, helicopters, aircraft and naval mounts. We are an ammunition, weapon and turret manufacturing company with decades of background in all theatres.

“Our engineering teams are fully integrated across these domains and understand the challenges of turret development. Nexter has now been contracted by DGA with Thales to develop the naval version of the RAPIDFIRE.”

At an oral evidence session of the UK Parliament’s Defence Select Committee, Francis Tusa, Editor of Defence Analysis told MPs: “The problems we have had, in the UK, with the 40 millimetre cased telescoped ammo have not been replicated in France, where they have taken the system, all of it, as designed. It is now in full-scale production.

“They now have a turret that would fit if we wanted to, just for the sake of argument, put it on to a Boxer. It works absolutely fine. Yes, there have been problems along the way, without a shadow of a doubt, but it works. That is because they had a much more coordinated approach to the development, design and then how they were going to put it into production.” 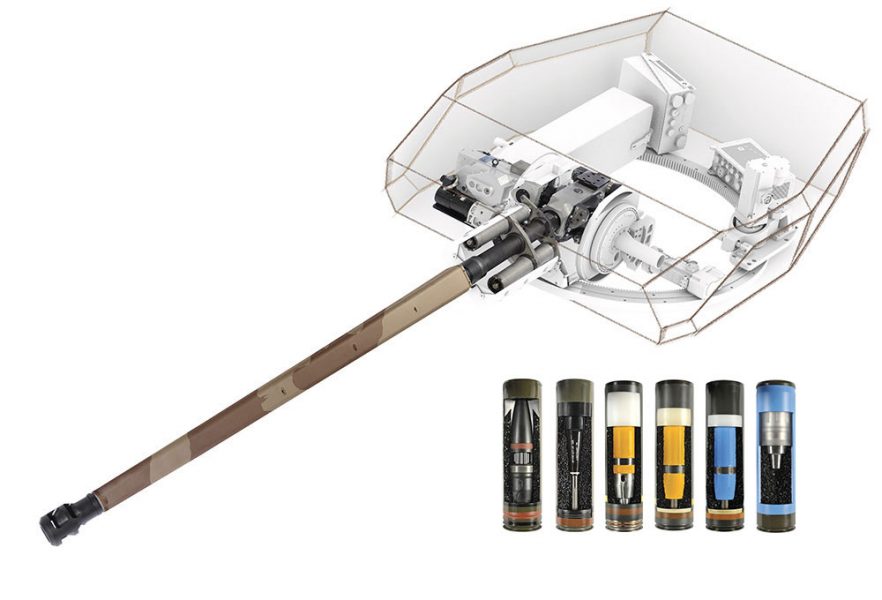 Problems along the way in the UK

In earlier evidence, reported on by Army Technology, both General Dynamics Land Systems UK and Lockheed Martin UK, laid blame at the door of the cannon for delays, writing to MPs that qualifications and changes to the cannon meant their respective programmes had faced delays.

Lockheed Martin told Army Technology: “No specific aspects of the cannon have proven to be a particular problem for WCSP. Instead it was a lack of suitable design definition (interface information) from CTAI and changes to the design definition made by CTAI as a result of the CT40 qualification programme that caused challenges.

“This is because the design definition changes required rework and updates to the WCSP design to accommodate these changes.”

During the development process, Army Technology understands that in 2014, Lockheed Martin raised concerns about CT40 cannon’s torque, however, these issues were resolved at the time.

Lockheed, in written evidence, wrote that a final ‘technical baseline and configuration’ for the CT40 cannon was not established until December 2016, five years into its Warrior CSP development contract with the MOD. Lockheed Martin added that this was three years later than expected and resulted in a contract amendment which saw Lockheed ‘reengineer the integrated turret system and re-design the Cannon Control Unit and its interfaces.’

In the UK, the CT40 Cannon is overseen by a separate Defence Equipment and Support (DE&S) contract to the AJAX and Warrior CSP vehicles.

General Dynamics echoed Lockheed Martin, in blaming the cannon for some problems with its AJAX programme, writing: “At the time of AJAX contract award, it [CT40] was a development item; its performance was not fully characterised and subsequent configuration changes were not fully reported. It was also delivered late to the programme.

“These issues resulted in significant design changes on AJAX and further trials, leading to additional costs and delays.”

The demonstration contract for AJAX was originally issued in 2010, with a production contract issued in 2014, the same year Nexter was contracted by France to build the Jaguar. At this stage, the British Army has yet to take delivery of a turreted AJAX variant.

General Dynamics added: “The Interface Control Document issued to GDLS-UK for the contract did not fully represent the 40mm Cannon’s performance characteristics, leading to the need for design change.

“In addition to these design issues, the CT40 was issued to GDLS-UK significantly later than planned in the joint programme schedule, and at a different configuration to that in the contract documents, resulting in substantial redesign and consequential programme delays of around 18 months”

In its evidence, General Dynamics also said that a ‘stable and defined build standard’ was not realised until the AJAX contract was recast in 2019.

“The CT40 design was fixed for cannon production in March 2015 and the interface has not changed; in 2015 CT40 was sufficiently characterised for integration.”

General Dynamics Land Systems–UK vice president Carew Wilks recently told the Defence Committee: “There were some delays around the introduction of the cannon and the changes to configuration. That caused some early delays to the programme, which had a knock-on through to where we are today.

“Secondly, the cannon, which I know has been discussed previously today, is an item that has been supplied to us by the MoD for the vehicles. There were some delays around the introduction of the cannon and the changes to configuration. That caused some early delays to the programme, which had a knock-on through to where we are today.”

A source also told Army Technology that by 2019 cannon qualifications were done and added that during the development process Lockheed Martin made little effort to work with CTA International, instead preferring to work with the MOD on issues with the cannon as it is supplied as government furnished equipment (GFE).

Army Technology understands that the MOD mandated the cannon as AJAX and Warrior CSP’s main armament but did not mandate the weapons subsystems, hence Lockheed’s decision to develop its own.

Development of Warrior CSP was also delayed, as a result of the government supplying Lockheed Martin with Warrior hulls for the demonstration programme that were not up to standard.

Speaking to MPs, Lockheed Martin Ampthill vice president and managing director Lee Fellows said: “For me, the cannon change caused some disruption that we had not anticipated. I would like to have seen a closer commercial link between us and the cannon provider to the Ministry of Defence. We would call that a joint change board.

“That would have helped us to understand the quantum of change that was going to affect the development programme. Bearing in mind that I have just heard two witnesses beforehand talk about the desire for future change in armoured fighting vehicles, my recommendation is a very close scrutiny and review, so that, if there is a desire to change requirements that are outside of the core contract, the coherence is closely maintained.” 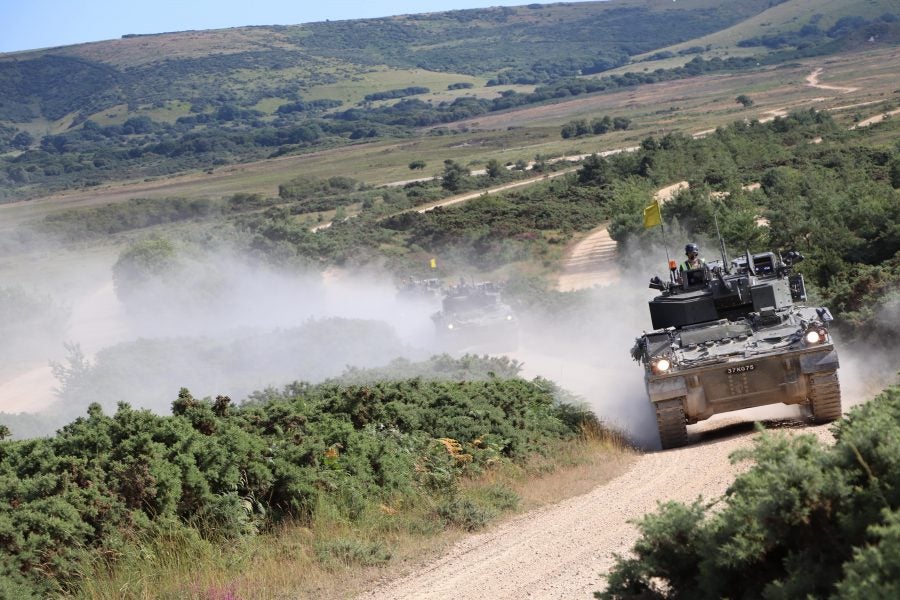 What’s next for Warrior, AJAX and Jaguar?

As it stands, all three vehicles featuring the CT40 cannon have largely ironed out development issues and are making good progress. Lockheed Martin expects a production contract to be signed for Warrior CSP next year, General Dynamics has finished production of 60 AJAX vehicles, and Jaguar is slated for deliveries late this year.

On the General Dynamics front, 157 hulls, 45 turrets, and the first 60 vehicles have been built as of August 2020, with the MOD having accepted 17 vehicles and 12 delivered into service. The AJAX contract is worth £4.6bn for a total of 589 vehicles across six variants that will replace the in service fleet of CVR(T) vehicles.

Nexter for its part is offering the MOD a Boxer MIV module fitted with the turret used on its Jaguar vehicle. The system dubbed Boxer T40 would fill a requirement for direct fire capability for the British Army’s planned STRIKE Brigades. 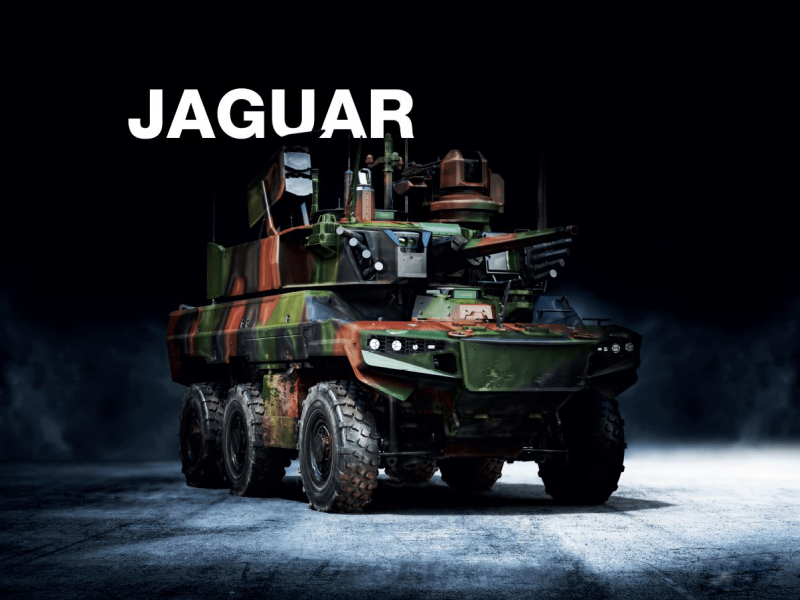 In evidence, KNDS said: “Jaguar, like AJAX and WCSP in [the] UK, has the CT40 cannon as its main armament. With investment and support from UK MoD and the French DGA, referenced within the Lancaster House treaty, this battle field dominating technology has been jointly developed and produced by NEXTER (France) and BAE Systems (UK).

“By leveraging this successful investment and technology lead, within which UK is already part, KNDS can offer UK ARMY the opportunity to equip their BOXER MIV with the JAGUAR CT40 turret technology as a solution for STRIKE Direct Fire (BOXER T40) and/or a cost effective alternative to WCSP.”

A question mark has been placed over the Warrior CSP programme, with one source telling Army Technology that the vehicle is in the most doubt as the UK looks to reassess its forces in an upcoming integrated review of defence security and foreign policy. Earlier this year it was reported by the Times that the UK was assessing options to axe its entire fleet of Main Battle Tanks (MBTs) and IFVs.

Last week, Army Technology reported that a production contract for Warrior CSP, based on the upgrade of 275 vehicles, would be worth around £1bn to the UK economy. The figure comes from a KPMG report commissioned by Lockheed ahead of an expected production contract next year. Lockheed Martin has previously said 80% of the Warrior CSP solution in its current configuration is sourced from British suppliers.

The KPMG report added that a production contract for the vehicles could deliver 100 annual Full-Time Equivalent (FTE) jobs and up to 2,000 annual FTE jobs through the supply chain and direct employment at the peak of production. KPMG also found that a production contract would generate £278.9m in direct GVA, £484.3m in indirect GVA from the supply chain and £280.4m in GVA created through Lockheed Martin employees spending Warrior CSP-related wages.